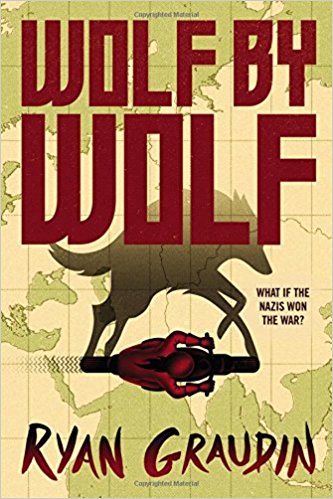 Wolf by Wolf by Ryan Graudin

From the author of Invictus is alternate history Let’s kill hitler, with a sci-fi twist.

Oh, was killing hitler not enough? Imagine a midcentury world where the Nazis won but an x-man they created is plotting to kill the furher by winning a motorcycle tour.

I can’t not turn down anything about killing Nazis, so yes I was here for this book, and it did not disappoint.

Yael is a young girl when she’s taken into a concentration camp and experimented on, and she develops the ability to shapeshift. She uses this ability to get out and find a resistance group, who protects her and makes her part of their plot to kill Hitler.

Graudin has created a complex, conflicted character with Yael, and created a super realistic depiction of a fictional, axis-run world. The narration jumps between Yael’s past and present in a clear, well structured way, and helps build her motives and actions so well. Thank God this is a trilogy because I need to know more after that ending.

Side note – yael poses as another woman in most of the book, and we never fall into the weird GoT incest trap of her falling for the woman’s brother.

Anyway this gets 4 out of 5 wolves. I can’t wait to get off the waitlist for book 2.

Wolf by Wolf is a real scotch novel, which goes against the German beer or Japanese sake tropes, but there you have it. But killing Hitler seems like a scotch occasion
FBGM,
L

One thought on “DRUNK REVIEW: Wolf by Wolf by Ryan Graudin”