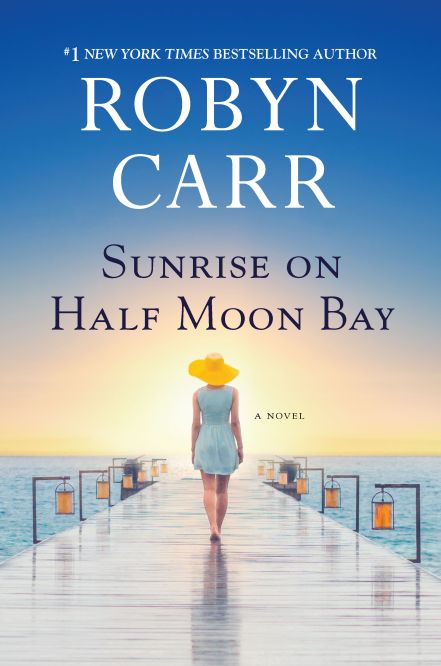 Sunrise On Half Moon Bay by Robyn Carr

**We received an early copy from the publisher in exchange for an honest review. We’d like to thank Robyn and Harlequin for the opportunity. This book came out on April 14th and all the buying links are at the bottom of this post.**

What I drank prior: prosecco. I was in the mood for some bubbly

Adele and Justine have never been close. Born twenty years apart, Justine was already an adult when Addie was born. The sisters love each other but they don’t really know each other.

When Addie dropped out of university to care for their ailing parents, Justine, a successful lawyer, covered the expenses. It was the best arrangement at the time but now that their parents are gone, the future has changed dramatically for both women.

Addie had great plans for her life but has been worn down by the pressures of being a caregiver and doesn’t know how to live for herself. And Justine’s success has come at a price. Her marriage is falling apart despite her best efforts.

Neither woman knows how to start life over but both realize they can and must support each other the way only sisters can. Together they find the strength to accept their failures and overcome their challenges. Happiness is within reach, if only they have the courage to fight for it.

Set in the stunning coastal town of Half Moon Bay, California, Robyn Carr’s new novel examines the joys of sisterhood and the importance of embracing change.

Drunk Overview: two sisters are going through some major life changes. Justine has just found out her husband is a shit bag and Adele. Who was caregiver for her parents, suddenly has nothing directing her life. Both situations are obviously more complicated than Ive made it sound (Justine has two kids and Adele had a past relationship that crazhed and burned yhat makes her sensitive to living her life) but over the course of a year they change.

First off, I thought this was a romamce which I would argue it is NOT. The book is still good and I enjoyed it but I think I was expecting something a little different.

Characters: the thing I really enjoyed about this book was the charactet growth. Adele started out a little mousy without direction, and Justine became less selfless (in a very good way). Both of our main characters were caregivers in their own way whoch is what madr the changes in their lives so interesting. I think some of Adele’s growth was a little cliche but Justine really caught me. The daughters didn’t feel like convemient “she should have children” kids, which is always nice. I felt like Adele’s best friend was a little flavorless but I did really enjoy Justine’s PI.

Plot: this is a book where its a little hard to talk about the ploy because this book was so character driven. The actual things that happened didnt seem all that important. What mattered were the feelings; which usually started woth helplessness before determination before pride.

World building: pretty nice. I had a good feeling for the small town they were in, but again the world itself didnt feel too important outside of the family house. Everything else was there for character.

What to pair it with: chardonnay with an ice cube in it.