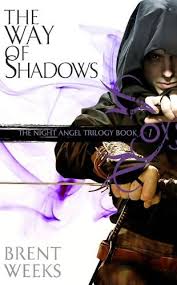 The Way of Shadows by Brent Weeks

What I drank prior: Lots of tequila and lots of beer.

Spoiler-free Overview:
So much like Mask of Shadows there’s a kid, Azoth, who’s a street rat like Aladdin and he gets taken under the wing of Durzo Blint, The Best assassin in all the land. He integrates himself into court life, tries to learn, things happen.

Spoiler-free Thoughts:
Listened to this on audio. Great narrator. I was hoping this would be as great as Weeks’s Lightbringer series. An EXCELLENT fcuking fantasy story that easily makes the top 5 series list. But it wasnt.

Plot: To say this is a character driven story is an understatement. We met Azoth when he was like… 8… the book ends with him at 18… not much happens except that we see him grow. We see him learn. We form bonds with the characters. And the last couple chapters shit goes down. Real hard. But it was good.

Writing Style: I really do like Brent Weeks’s writing. He knows how to keep my attention. He ain’t flowery but he gets the job done. And well.

World Building: I don’t… know much about it… except what was told to us in the last couple chapters. But I’ve been told enough to keep me happy and interested in continuing.

What to pair it with: Beer. A wheat beer. It’s good but not great. Ya know?

Rating: 3/5 Shots. Good, but it ain’t no Lightbringer.

COMMENT DOWN BELOW: Should I continue with the series??

7 thoughts on “The Way of Shadows by Brent Weeks”