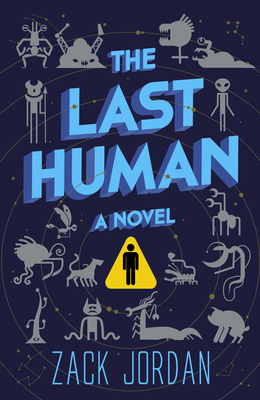 The Last Human by Zach Jordan

**We received an advanced copy of this book from NetGalley in exchange for an honest review. We’d like to thank Zach and Del Rey Books for the opportunity. This book comes out on March 24th and you can get it here or at your local independent bookstore**

What I drank prior: had a delightful roommate night with Sam so drank some (probably?) Spanish white wine before finishing it off with a little more white wine.

The last human in the universe is on the run from a godlike intelligence in this rip-roaring debut space opera.

Sarya is the civilized galaxy’s worst nightmare: a Human.

Most days, Sarya doesn’t feel like the most terrifying creature in the galaxy.

Most days, she’s got other things on her mind. Like hiding her identity among the hundreds of alien species roaming the corridors of Watertower Station. Or making sure her adoptive mother doesn’t casually eviscerate one of their neighbors. Again.

That is, until an encounter with a bounty hunter and a miles-long kinetic projectile leaves her life and her perspective shattered.

Thrown into the universe at the helm of a stolen ship–with the dubious assistance of a rebellious spacesuit, an android death enthusiast on his sixtieth lifetime, and a ball of fluff with an IQ in the thousands–Sarya begins to uncover an impossible truth.

What if humanity’s death and her own existence are simply two moves in a demented cosmic game, one played out by vast alien intellects? Stranger still, what if these mad gods are offering Sarya a seat at their table–and a second chance for humanity?

The Last Human is a sneakily brilliant, gleefully oddball space-opera debut–a masterful play on perspective, intelligence, and free will, wrapped in a rollicking journey through a strange and crowded galaxy.

Drunk Overview: Sarya believes she is the last human, but has been raised by what is ultimately a black widow. A higher intelligence (which cant be argued) knows of othet humans and then kinda kidnaps her. It may or may not go as expected. Regardless there is a multiverse and higher intelligences and a number or legitimate moral questions.

Spoiler-free Thoughts: this is a book that really made me think avout how I felt. My opinioms have been wildly different at different points of this book. When the rules for being part of society were mentioned I immediately understood why humans werent part of yhe system (I might have been a little vit insulted on behalf of humanity) but this book makes so many points….

Characters: Sarya. She can be really dumb (if realistically so) to the point where she reminded me of Jude from the Cruel Prince (so many poor choices. That poor girl). But at the same point the decision made sense in the moment. I dont want to get too into the other characters because some charactets who seem minor arent and some people who seem like major players bately show up. The interesting thing is their knowledge classification system and the way certain characters interact. Its fascinating what counts as intelligence depending on where the individual making the distinction lands. Its interesting to consider that the two largest impacts on who Sarya becomes are her mother and Eleven (I’ll get to eleven later-ish). Don’t get me wrong, there are other charactrts who matter. But I feel like those are the caharactets who most shape what Sarya becomes as she learns more and more

Plot: the plot definitely went in directions I wasnt expecting (partially because Sarya is basically a teenager with a few additional experiences and teens make bad decisions without realizing it). But the plot didn’t feel forced. Thinga progressed in ways that felt entirely organic. I love Eleven and everything she stands for and how much she shapes Saryas opinion.

Writing Style: fun? This is a book that kept descriptions in control. Different species communicate in different ways so that was an adjustment in writing but it seemed really well done.

World building: so good. By the end of the book I understood the different “political” positions teally well and even beyond that had a basic understanding of what the society was like.

What to pair it with:absinthe. Opens your inner eye???