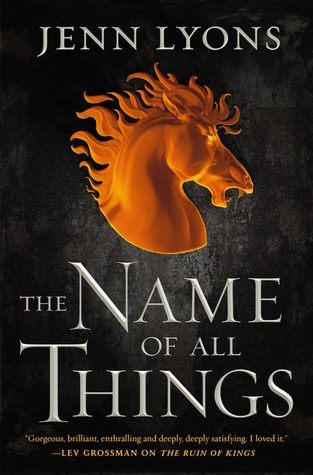 The Name of All Things by Jenn Lyons

**We received an early copy from the publisher in exchange for an honest review. We’d like to thank Jenn and Tor Books for the opportunity. This book comes out on Oct 29th and you can get it here or at your local independent bookstore**

What I drank prior: Ginny and I went out to dinner and I had a liquor drink and some wine and then more wine at home. There’s a new season of Schitt’s Creek on Netflix so we have a LOT to drink about.

“Everything epic fantasy should be: rich, cruel, gorgeous, brilliant, enthralling and deeply, deeply satisfying. I loved it.”―Lev Grossman on The Ruin of Kings

Kihrin D’Mon is a wanted man.

Since he destroyed the Stone of Shackles and set demons free across Quur, he has been on the run from the wrath of an entire empire. His attempt to escape brings him into the path of Janel Theranon, a mysterious Joratese woman who claims to know Kihrin.

Janel’s plea for help pits Kihrin against all manner of dangers: a secret rebellion, a dragon capable of destroying an entire city, and Kihrin’s old enemy, the wizard Relos Var.

Janel believes that Relos Var possesses one of the most powerful artifacts in the world―the Cornerstone called the Name of All Things. And if Janel is right, then there may be nothing in the world that can stop Relos Var from getting what he wants.

And what he wants is Kihrin D’Mon.

Jenn Lyons continues the Chorus of Dragons series with The Name of All Things, the epic sequel to The Ruin of Kings

Drunk Overview: this is the sequel to The Ruin of Kings so if you haven’t read that one check my review. This will have spoilers for book 1.

So our man Kirhin has the cool sword thing that basically released all demons into the world and he stops at a tavern. Lo and behold our red eyed bae from book 1 is there and she’s telling her story. She’s got a #past with creepy demon from book 1 and is basically just trying to protect her people and shit goes wrong. That’s all I got.

Spoiler-free Thoughts: this was both different and the same as book 1. We get the past story from multiple perspectives and footnotes annotating the story but they’re different perspectives. Kirhin isn’t really in it… he’s only hearing the story. And I fucking loved it.

Characters: so we get a whole new cast of characters here. Some repeats but mostly new and LGBTQ+ rep. We get to hear from Janel, our red eyed bae. I feel like I know her so much better now and her motivations. She’s really just trying to live her best life. Then there’s Qown… a priest. This poor sweet child. He was tasked with hangin with Janel and then he wound up in a world of shit, poor thing. I love him so much. And then Dorna. Oh lord, Dorna. She is just the coolest character. She’s like the old gramma who knows everything. But let’s talk about Relos Var. he’s the absolute worst. I really love it when villains think they are doing what’s best and he is 100% that. Ugh, it’s so compelling.

Plot: this is a plot that builds up slowly. So slowly you don’t realized how immersed you are until it’s 1:30am and you can’t find a place to stop. You just have to know how certain things play out.

World Building: how much more do we get here? I think it’s pretty well established already, we just get to play in the world Book1 built for us.

What to pair it with: this goes with a tavern ale. No doubt.

4 thoughts on “DRUNK REVIEW: The Name of All Things by Jenn Lyons (A Chorus of Dragons #2)”