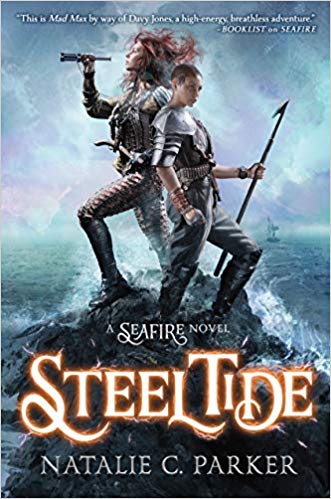 **We received an early copy of this from ALA. We’d like to thank Natalie and Razorbill for the opportunity. This book came out on Sept 11th and you can get it here**

What I drank prior: A bunch vodka, but over some time so I’m not hammered or anything but feel comfortable enough to do a review.

The second book in a heart-stopping trilogy that follows the captain of an all-female ship intent on taking down a vicious warlord’s powerful fleet.

Caledonia may have lost her crew, but she’s not done fighting yet. After nearly dying at the hand of a powerful foe, Caledonia is pulled from the sea and nursed back to health by a crew of former Bullets that call themselves Blades. The Blades escaped Aric Athair’s clutches and now live a nomadic existence, ready to disappear at a moment’s notice should trouble come their way.

But Caledonia wants to do more than just hide. She wants to find the Mors Navis and her beloved sisters. She wants to continue fighting Aric’s fleet and to take back the Bullet seas. She’ll need to do everything in her power to convince the Blades that fighting is their only option, that there has to be a life better than the one under Aric Athair’s reign, and that finding the women of the Mors Navis is the first step to revolution.

Drunk Overview: this is the sequel to Seafire which i reviewed and didn’t love but since I got my hands on an arc I though why not? Basically, our main lady Caledonia has left her crew behind in the name of vengeance and got herself stabbed. She got picked up by some dudes and dudettes who call themselves Blades, aka former Bullets, and they (blindly) choose to follow her in her quest.

Spoiler-free Thoughts: while this was still not great, it was WILDLY better than book 1.

Characters: so they’re all still pretty dumb. But less dumb than before. Caledonia realizes she’s not unbeatable, and she’s got new burdens to deal with namely the loss of some of her former crew. She’s also super struggling with leadership which is something I relate to. We’ve got some new characters, Sledge and Pine who are precious to me. While they were only just introduced, through the world building in book 1, I feel like I can get to know them faster in book 2. Also ANGSTY ROMANCE.

Plot: this was better paced and more believable than in book 1, but there were still some things I was like “well that was far too easy” and “huh… that was out of this character’s personality but it serves the plot well”. So. It didn’t feel seamless to me

Writing Style: I am really impressed by how this author can have such a blah world and plot but have such a compelling writing style. Those things usually don’t work against each other but that’s what you’ve got.

World Building: uh… yeah. It still sucks. No extra world buildy stuff except probably two paragraphs that needed more explanation. There were some CHARACTER jaw drops but not world buildy ones.

What to pair it with: uh…. I feel like a rum and coke? Sorta pirate-y but also basic AF?

COMMENT DOWN BELOW: Who’s read either of these books? I’m REALLY struggling with them, but I do kinda want to know what happens.