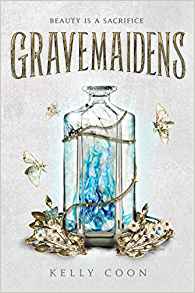 Minda’s preg review of Gravemaidens by Kelly Coon, out 10/29! You can get it here. Thank you to NetGalley for the advance copy.

The start of a fierce fantasy duology about three maidens who are chosen for their land’s greatest honor…and one girl determined to save her sister from the grave.

In the walled city-state of Alu, Kammani wants nothing more than to become the accomplished healer her father used to be before her family was cast out of their privileged life in shame.

When Alu’s ruler falls deathly ill, Kammani’s beautiful little sister, Nanaea, is chosen as one of three sacred maidens to join him in the afterlife. It’s an honor. A tradition. And Nanaea believes it is her chance to live an even grander life than the one that was stolen from her.

But Kammani sees the selection for what it really is—a death sentence.

Desperate to save her sister, Kammani schemes her way into the palace to heal the ruler. There she discovers more danger lurking in the sand-stone corridors than she could have ever imagined and that her own life—and heart—are at stake. But Kammani will stop at nothing to dig up the palace’s buried secrets even if it means sacrificing everything…including herself.

What I drank prior: I’m traveling on an a.m. ferry from Split to Dubronik for our European babymoon, so espresso and lots of water.

Spoiler-free Overview: Our protagonist Kammani (K from here on out) lives in Alu, a society where three beautiful young women are “honored” to accompany the country’s Lugal (king) into the afterlife when he dies. Read: they are killed. When K’s sister is selected as one of the three maidens, she uses her skills as a healer to attempt to save the ruler’s life.

Spoiler-free Thoughts: Could not put this book down! There was so much I loved about it, even though I had some moments of frustration (see spoilers section for explanation) toward some of K’s actions/conclusions. This all came together at the end though. And even without that, I still would have adored it. Will want to read the next book in the duology ASAP!

Characters: As far as best characters go, we have K, who was wonderful though frustrating at times, bff Iltani, love interest Dagan, honorable-to-a-fault Nasu, and Nin (princess) Arwia. They are all my children. Dagan’s mother, who’s name is eluding me right now, was also great. As for characters I liked less, the younger sister Nanaea was super bratty and spoiled, so sometimes she was hard to take/root for to save, imo.

Plot: Once K’s sister is selected as a doomed maiden, she sets out to stop it. In a first attempt to heal the Lugal, she sends her Abum (father)—the country’s most gifted healer even though he was ousted from the upper class—but he is mysteriously murdered before he can get there. So it is up to K who is selected as the new palace healer and the only person who can save her sister, but she quickly finds she bit off more than she can chew. As events unfold, K finds herself in the midst of a sinister plot, a murder attempt, and the weight of the world on her shoulders.

One amazing thing about the plot is that it really delves into how different people handle grief. The exploration of the characters’ grief was insightful and really put their individual journeys’ in a new perspective—even Nanaea.

World Building: I loved that the world was based on ancient Sumar, which gave it more of a diverse perspective. The descriptions were rich and I felt like the really understood the basis of the society, even the traditions such as the gravemaidens and why people are so devoted to the rulers and the country’s laws, despite being brutal.

Writing Style: Was solid. I like that we got K’s thoughts and perspective with the first-person narrative and she turned out to be a type of unreliable narrator. The only thing that bugged me—and seriously this is super minor—was the phrase they use to tell time: “turn of a dial.” Apparently the amount of time literally everything takes is one “turn of a dial.”

What to pair it with: Definitely not something that will stain as you make wild hand gestures in frustration and excitement throughout the book. I’d suggest a gin and tonic with the right amount of bite.

Rating: 5/5 – I just loved this book, despite some frustration that all made sense in the end

Do you think you’ll add Gravemaidens to your TBR shelf? Tell us in the comments.