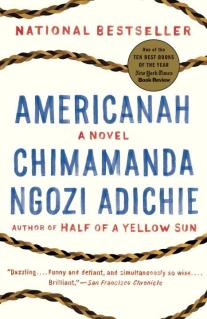 What I drank. A frew (9?) brews, and about 20 mins ago I chugged half a bottle of wine so, who I’ll probably have to hurl in a few seconds. Buckle up. (Editor’s Note: he did not, in fact, hurl)

Spoiler free plot overview: ya girl ifem is a Nigerian who moves to the states for a *scarequotes* “better life”, and as she does so, she interacts with the many contradictions that americanness entails. When we meet her, she’s a wildy successful blogger movingfrom her job at Princeton, back home to Nigeria, after spending about a decade in the US. Throughout the course of the novel, She encounters racism, sexism, and classism from a perspective that is colored by her perspective as an African immigrant. Even this is fraught; some of her contemporaries are “scammers”, some are idealogeus, some are college professors. Ifem has a kind of second coming of age in East Coast Liberal America, which is interesting as fuck. She watches the Obama campaign and presidential election from a unique perspective that is hella interesante.

Spoiler free thoughts: I’m having a great convo with my good friend about what it means to comment on a fictional story that isn’t about you. For her, writing about a novel like Americanah or Homegoing or The Hate U Give felt like an overstepping of bounds, like the story wasn’t for you and even though you learned from it it, in talking about it, you’d be retelling it uglily, bastardizing it. Now, she and I agree: that sometimes a story that isn’t “for you”, that your reading is tangential, and while not inconsequential, is irrelevant. Oh you read it? Sweet. Good for you. We also disagreed, to this end: a story that isn’t yours can still affect you, can still spread its energies through your eyes to your friends’ eyes and thus into their lives. Americanah is where I found that ground, because it’s a story that is in so many ways “for” me but not about me. but anyway the…

…Plot is kind of stationary, not a lot “happens”, but that’s not what drives the novel. It’s all about Ifem and her experiences, and whereas they are informative, they do not necessarily drive the action, far more compelling are the…

…Characters. Our cast is wildly diverse, and intentionally so. This is not a novel where one can pontificate about the symbolism of one certain character bc all have a value here. Ifem’s first love Obinze, her aunt and fellow American expatriate, Uju, and Uju’s son Dike, Hot White Boyfriend Kurt, and a whole host of (intentionally) forgettable Americans help to compose a tapestry of identity and (be)longing that is made tactile by the…

…Writing syle: ifem’s blog posts are interwoven with the third person narrator. The narrator’s limitations highlight Ifem’s shortcomings and fears, and the blogposts that intersperse the novel highlight the identity crises that the protagonist undergoes. They are rarely topical, that is, they rarely “fit” the chapter that they go in, but the light that they shed is illuminating, all redundancy intended. They are witty and irreverent, to boot.

Separately and crucially to me, she writes about the 2008 Obama campaign, and holy fucking shit, I wept on a plane three separate times during that one chapter. I’m literally crying over my favorite episode of Dr Who rn because I’m reflecting on the thoughts I had those nights, nights I had forgotten about, or contextualized before she brought them back to the surface. It’s just powerful, powerful stuff.

Spoilers, honey:
She OBVIOUSLY ends up back with obinze. Thtats ostensibly WHY she goes back home in the first place. I’m not NOT annoyed, because Adichie writes the shit out of it. It’s complicated and has a lot to do with the flawed humanness that this novel is allabout I think, but I feel like I saw it comin, and wasn’t happy asbout it, even tho Ifem and Obinze were. He has a wife and kid but they still carve time out (of) for eachother. I mean its beautiful or whatever.

Rating (in brews) uhhhhhhhhhh 4.3/5 all-day ipa’s (Founder’s) because it took a while to build momentum, but then I realized I was largo sauced.

Pairing: tequila, triple sec and mango, because this feels like a summer, tropical novel, and especially at the end, there’s a complicated and inevitable pull of two lovers together that can only be recreated by tequila or, perhaps, a comet.

One thought on “Americanah by Chimamanda Ngozi Adichie”