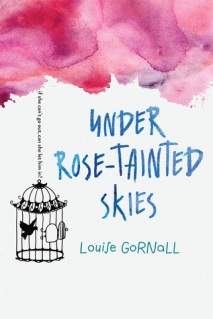 Under Rose-Tainted Skies by Louise Gornall

What I drank prior: It’s Doctor Who night!!! Someday I’ll explain that better in a blog post, but basically we watch Doctor Who and have a drinking game, get hammered and then pull up our computers to write about the books we read. The results are about 90% of our posts. I’ve had 3 glasses of wine and I think I’m on beer 6.

Spoiler-free Overview:
WE’ve got our BAE Norah, who has agoraphobia (feer of leaving the house), severe anxiety, and OCD. THe legit OCD, not just “i need to have all my colors in rainbow order.” She counts and has significant panic attacks if she doesn’t do all of her compulsions in the right order. It’s legit. Anywho, Norah is dealing with her life with her mom as her only ally. My mans Luke shows up as the boy next door and he attempts a friendship with her. Characters are developed, and things happen.

Spoiler-free Thoughts:
I adored this book. I have a degree in Psychology and I can say, the portrayal of mental illness in this book is wonderful. It’s not glorified, it is real. This character driven story is beautifully written and imho helps those who don’t suffer from these maladies understand a little better.

Characters:
This story is written in the first person. I feel like we get to know her way better this way. Norah is wonderful. SHe’s a sweet, kind, perso who just so happens to need to stay inside and take the last step on the stairs twice.

Our leading man, Luke, is also great. He doesn’t try and “fix” her but he’s also not perfect. He understands she ill, but doesn’t always know her boundaries. He steps over the line, realizes what he’s done, and apologizes. Its refreshing.

Plot:
Very character driven, but since i’m not going to do a spoilery section for this (not sure its necessary) there’s one bit that happens in the end that is terrifying. I couldn’t put it down. So good.

Writing Style:
This is where this book shines. For those of you who don’t know, I also struggle with mental illness. I have anxiety, panic disorder specifically. THe narrative in this book was tough for me. The way its written almost triggered me into a panic attack. It was so relatable. like. the way her thoughts are processed is like a capture of my own brain, though not as severe. But man, it was SO wrll written. so good.

What to pair it with: Redbull Vodka. Suck those sonofaguns down like its your job.

COMMENT DOWN BELOW: Have you ever read a book that was so relateable that you had to put it down?

2 thoughts on “Under Rose-Tainted Skies by Louise Gornall”