Hey everyone, long time no write.

I’m debating whether or not to do a review of the second book because apparently I reviewed the first book (thanks Sam for reminding me?  Also here’s a link) and I might still do it (I guess we’ll see).  Regardless, I’m finally on the right coast, both literally and figuratively and it’s good to be home and writing while Parker and Sam are nearby. It’s increidbly comforting to listen to them debate while I”m attempting to write in a way that is eloquent in literally any way.

For this I drank quite a bit of white wine; Its a personal favorite of Sam and mine. It costs about five dollars from Trader Joes, and my favorite kind of wine is a five dollar wine so I’m a happy camper.

Into the real stuff, this is Brandon Sanderson’s Hero of Ages: 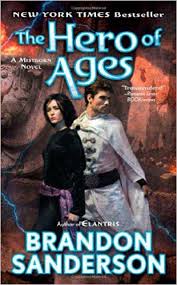 Spoiler Free Review: So a ton of shit has happened and if you haven’t read the first two books please don’t read this; In the first book they overthrew the lord ruler, in the second book they took control of Luthadel, and in this book they’re dealing with the inevitable heat death of the universe. Quite literally; Vin and Eland are together trying to diplomacy their way into the control of the city while knowing they will probalby have to fight their way into ownernship, while the rest of the crew is completely split up. It’s actually one of the things I had problems with is that so many of the characters were split up into different areas, and therefore not interacting, which made me not thrilled. Between Sazed having lost his faith, and Vin and Eland not being able to act the way they normally would and Spook bieng Sppok in this book, it just didn’t quite click for me for a long time. There was definitely a slump in the middle of the book and I had to push myself to keep writing. And the slump surprised me becuase there wasn’t a slump in the other two books. Straight up, I wasn’t expecting for everything to be slow. And it wasn’t like things weren’t happening, there was always something happeneing; whether there was diplomacy, or sneaking around a city, or fights where people were trying to take over a group of koloss (creatures that pretty much fought and did nothing else) but the way things happened seemed pretty much blah for about 400 pages. And that is a long time to deal with blah. That being said, the last 200 pages picked the fuck up. I mean honestly, if even one of the revelations in the last 200 pages had happened earlier, whew.

Holy crap did the last 200 pages have a lot of stuff going on.  Between the revelations about the kandra nation, and Vin becoming the force of preservation, and spook realizing what was actually happening and then fucking Sazed???? I mean, just, whew. I had so much trouble putting down the book at this point. The fact that Vin had to fight with Ruin to try and keep the world from ending, even more that Eland’s death was the reason that Vin could finally defeat Ruin with the double defeat of using all of Ruin’s power to fight all of Ruin’s forces? And then… I have to say, I normally have a problem with a deus ex machina, and yet this one was so well planned out. The fact that Vin’s earring ended up being important, and the irrritating thing is that I can’t even remember all of my reasons. But the use of gender neutral terms in the prophecy, to the way the religions that Sazed ‘remembered’ shaped the world, to the way that people were brought back… Just holy shit, Brandon Sanderson, way for it to look masterful.

Rating: While I loved the ending of this book, I have to give it four out of five shots. The fact that the book had such a slump, the kind of slump where I would have put the thing down if I hadn’t known that the ending would be worth it (thanks Sam), doesn’t negate the ending and how amazing it seemed. I mean, it was really hard to get through even if the end seemed perfect.

Pairing: I honestly don’t know what to paid this with. On the one end I feel like it should be the kind of drink that you get at the ren-faire (a combination of mead and hard cider which let me tell you is delicious on a hot day if you drink it before it gets warm) or, like, a long island ice tea. The kind of drink that in the short term doesn’t seem like it’s going to be a problem but it’s you at the very last second you think it would. I’m gonna stick with teh mead/hard cider drink because it seems to fit just a little bit better.