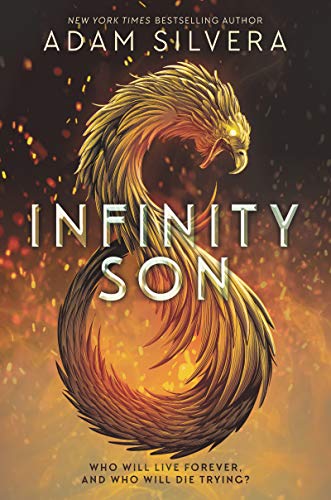 **We picked up a finished copy of this book at ALA Midwinter. We’d like to thank Adam and S&S for the opportunity.**

What I drank prior: It’s 4th of July and my Quaranpod had a bbq with 4 different frozen drinks and of course i drank them all and it was dope. The frozen sangria was the absolute best for sure.

Balancing epic and intensely personal stakes, bestselling author Adam Silvera’s Infinity Son is a gritty, fast-paced adventure about two brothers caught up in a magical war generations in the making.

Growing up in New York, brothers Emil and Brighton always idolized the Spell Walkers—a vigilante group sworn to rid the world of specters. While the Spell Walkers and other celestials are born with powers, specters take them, violently stealing the essence of endangered magical creatures.

Brighton wishes he had a power so he could join the fray. Emil just wants the fighting to stop. The cycle of violence has taken a toll, making it harder for anyone with a power to live peacefully and openly. In this climate of fear, a gang of specters has been growing bolder by the day.

Then, in a brawl after a protest, Emil manifests a power of his own—one that puts him right at the heart of the conflict and sets him up to be the heroic Spell Walker Brighton always wanted to be.

Brotherhood, love, and loyalty will be put to the test, and no one will escape the fight unscathed.

Drunk Overview: This is a contemporary fantasy story about twins. One of them wants powers and the other doesnt but the one who does ends up with them. So. Emil doesn’t want powers and he has hella anzienty and his bro Brighton has a youtube channel and all he wants are powers. Emil is like.. getting jumped on the subway and his powers show up and they’re different from normal and B gets pissed cause clearly “he’s had them all along” but like… not. BEause its different the bad guys are after them so they all go in to hiding with the rebellion and things go from there.

Spoiler-free Thoughts: This was adorbs. I binge listened to this audio and it was a delight. Did it have anything deep or dark or important? No. Was it a gas? Yes. I needed something light like this. It was a delight.

Characters: They were so flat lol. The twins were separate but they were both a #trope. One was like “I WANT EVERYTHING WHY DON’T GOOD THINGS HAPPEN TO ME?!” and the other is like “…ok but bro can we just… go? you’re a little extra.” And the other characters all blur together. THere’s a mom and a bff and like… the rebels. I think there are three dude and two chicks in the rebellion but i have no idea cause… they were all the same. Emil is my son, though.

Plot: Contemporary fantasy that feels a ton like a super hero movie. i didn’t predict the end but i fucking should have because OF COURSE.

World Building: I love that the MCs were poor gay latino boys and it was amazing. The magic is a bit confusing, like, i think Adam expected that I would know some of these mythical creatures and magic types but some of them I didn’t. BUt also I did like that there is a way to acquire magic as well as being born with it. YOu usually get one or the other, but not both.

What to pair it with: Pinot Grigio – it’s good, i will always drink it but it’s nothing special.