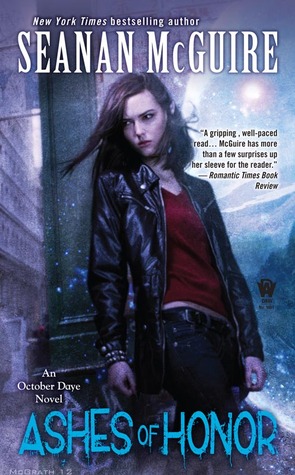 Ashes of Honor by Seanan McGuire

Review for Book 5 is here

What I drank prior; Beer! I was at a baseball game and you know you gotta have a beer. My sister and I made friends with the teams “Pack” and we got t-shirts. That part was delightful

It’s been almost a year since October “Toby” Daye averted a war, gave up a county, and suffered personal losses that have left her wishing for a good day’s sleep. She’s tried to focus on her responsibilities—training Quentin, upholding her position as Sylvester’s knight, and paying the bills—but she can’t help feeling like her world is crumbling around her, and her increasingly reckless behavior is beginning to worry even her staunchest supporters.

To make matters worse, Toby’s just been asked to find another missing child…only this time it’s the changeling daughter of her fellow knight, Etienne, who didn’t even know he was a father until the girl went missing. Her name is Chelsea. She’s a teleporter, like her father. She’s also the kind of changeling the old stories warn about, the ones with all the strength and none of the control. She’s opening doors that were never meant to be opened, releasing dangers that were sealed away centuries before—and there’s a good chance she could destroy Faerie if she isn’t stopped.

Now Toby must find Chelsea before time runs out, racing against an unknown deadline and through unknown worlds as she and her allies try to avert disaster. But danger is also stirring in the Court of Cats, and Tybalt may need Toby’s help with the biggest challenge he’s ever faced.

Toby thought the last year was bad. She has no idea.

Drunk Overview: God this book fulfulled so much of what I wanted. TOby is still dealing with the falliut of losing her daughter (to humanity), her boyfriend (to death), and her powers (to different powers). Turns out a friends previously unknown daughter is tearing holes in reality to old Fae. Its wild. And causes problems!

Spoiler-free Thoughts: Honestly this book brought a lot of things to life that I had been waiting for. That includes relationships, realizations, and general knowledge

Characters: this is the book whete people finally talk to Yoby about how the way she approaches problems bordwrs on suicidal. This point is brought up by the people closest to her, the people who might be able to convince her thats true. The delightful thing is this book did little to add new characters. It didnt have to. Almost all yhe mecessary characters had appeared before.

Sidenote. A relationship I had been hoping for for a couple of books finally happened!!! Ive basically been celebrating ever since.

Plot; Toby is best when she’s working to help someone close to her. The stakes are so much higher when she’s invested. Etienne (her trainer) has a daughter who is missing, so this ploy has everything; a personal toich, the possibility of destroying Faerie, and so much more wrapped up. I did enjoy the various twists including difficulties from Tylbats court, the bried appearances of the parts of Faerie that shouldnt be accessible, and additional hints about the wider world and magic. As always, tuis was high paced. Id be okay if less charactets faced near death mulyiple times in a single book but hey thats part of the genre.

World building: continues! This world is already so wide with all the different “happenings” and “knowes” and yet there’s still more. We get a brief look at an area of Faerie that had been closed off which was fantastic.

What to pair it with: Sherry. This was a sweet sweet victory