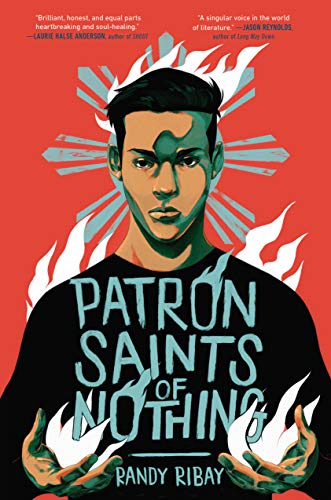 Patron Saints of Nothing by Randy Ribay

All the feelings by Linz

**We received a finished copy at ALA. We’d like to thank Randy and Kokila for the opportunity**

What it’s about (excerpt from Goodreads blurb): “Jay Reguero plans to spend the last semester of his senior year playing video games before heading to the University of Michigan in the fall. But when he discovers that his Filipino cousin Jun was murdered as part of President Duterte’s war on drugs, and no one in the family wants to talk about what happened, Jay travels to the Philippines to find out the real story.

Hoping to uncover more about Jun and the events that led to his death, Jay is forced to reckon with the many sides of his cousin before he can face the whole horrible truth — and the part he played in it.”

What I drank: Sober Sunday turned into a trip to a brewery, and then Italian wine tasting, and then the dregs from earlier in the weekend. (This description was clearly written after the fact.)

Drunk Thoughts:
I FEEL SEEN. I HTE THAT PHRASE BUT IT HAS NEVER APLIED MORE IN MY LIIIIIIIIIIIIIIIFEEEE.

to write a book coming down so hard (and riohtly so) on duterte – you don’t even know how brave taht is my dudes. how Ribay describes the corruption and drug traficking and poverty – it is amillion times so correct. this is such a great book to introdcue the history of conflicvts int he philippines and the actula fucking insanity that is the current administration. I just – there is SO MUCH i want to say but so little i want to reveal bc i don’t want to ruin anything! READ THIS BOOK RN I WILL SEND YOU A COPY

IF I HEAR ONE MORE PERSON SAY WE DON’T NEED ANOTHER ASIAN TEEN COMING-OF-AGE STORY YOU CAN EFF OFF. (And feel free to replace Asian with any underrepresented group, it holds true, but obvi the Asian representation speaks to me on a personal level.) Oh, are there “too many” “too similar” books for you on second-generation Asian teen trying to learn how to live in America and still retain their Asian identity, or Asian-American teens going back to the motherland? Screw all y’all. A. They are not all the same story, thank you and B. even if they were, forgive us for wanting more books that make us feel like we belong to a community. I only had Claudia Kishi growing up, Mulan didn’t come out til I was a teenager, and you bet your butt there were VERY few mixed-race characters (and if there were, they were a plot device and never a character in their own right).

In Patron Saints of Nothing, Jay (the half-white, half-Filipino narrator) says “Fuck anyone who tries to tell you who you are and where you belong.” (And it’s a major theme in Slay by Brittney Morris, but that’s for another review.) WE decide how to define ourselves, how much to celebrate our diversity, and when it’s “enough.” WE NEED ALL THE DIVERSE BOOKS.

What I gave it: FIVE STARS

What I would pair it with: What else but THE beer of the Philippines, San Miguel

3 thoughts on “DRUNK REVIEW: Patron Saints of Nothing by Randy Ribay”