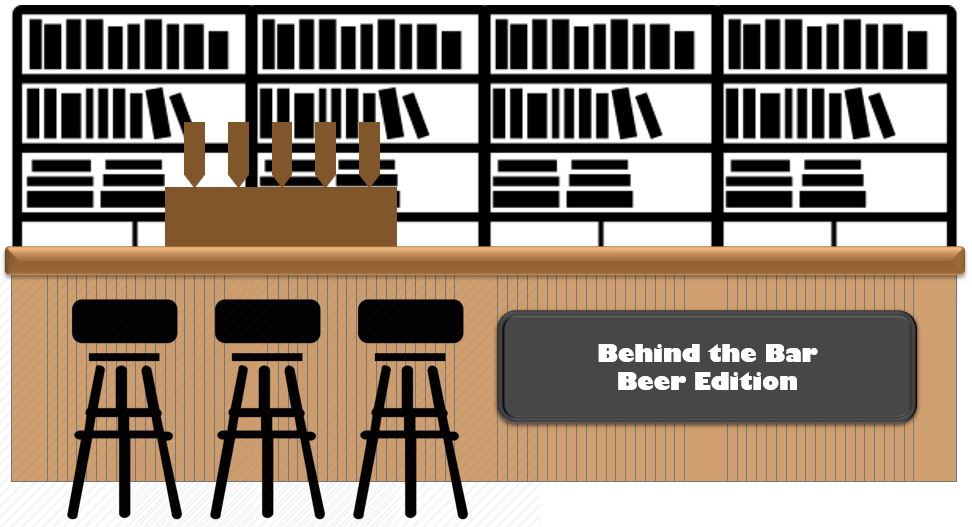 Behind the Bar: Beer – by Ginny

Hi everyone, this is the first time I’m doing one of these. It’s kind of funny because I will fully admit to the fact that I don’t drink a number of the beers on this list. The just aren’t my cup of tea. So there’s definitely a chance that I’m biased and might give slightly biased opinions… Have fun!

Lagers are what I like to call an easy drinking beer. They tend to be fairly smooth without the hoppiness that you’ll find in some of the other beers.

Fuzzy Nation by John Scalzi: I adore John Scalzi’s writing. There’s a fantastic sense of humor with a plot that keeps moving. I called a lager an easy drinking beer and I paired it with this because his books keep you reading and you’re still surprised when it’s gone.

There can be a large variety in the amount of hops between these beers, they can range from a little bit nutty (towards the porter end of the spectrum) to something light and airy (hi golden ales) but they tend to be heavy of flavor.

Empire of Sand by Tasha Suri: I adored this book. I’m pairing this with Red/Brown/Golden ales because this book has a little bit of everything and is heavy on personality. This book has a fantastic magic system, an ongoing sense of mystery, daring adventure, romance and more.

Hop Hop Hop. There can be a wide range of flavors in IPA’s but they really lean into the hops and the bitterness that can come with them.

Recursion by Blake Crouch: This book is complex. The plot is absolutely wild and you don’t quite know where it’s going to end.

Wheat all the way. These beers tend to be foamy and relatively light in color and have a hint of smokiness to them.

The Masked City by Genevieve Cogman: Don’t get me wrong, the actual plot within the world is fairly serious. But at the same point, this is a world with dragons and fae and an endless Mardi Gras. The plot is at times light and at other times

Sourdough by Robin Sloane: This seems fitting considering sourdough, sour beer, no? This book is pretty darn quirky and has plotlines that seem to come out of right field. The book itself has some tang/tartness to it which Is why I’m pairing it with a sour beer.

Porters and Stouts can practically stand up on their own. Usually with some level of creaminess these tend to linger on your tongue with a hint of coffee, or chocolate, or something just a little bit decadent.

We Speak In Storms by Natalie Lund: This book is smooth and flows really well, much like a porter. It’s also one of the books I kept thinking about even after I read it.

Comment down below: What books remind YOU of beer?

2 thoughts on “Behind the Bar: Beer Edition”