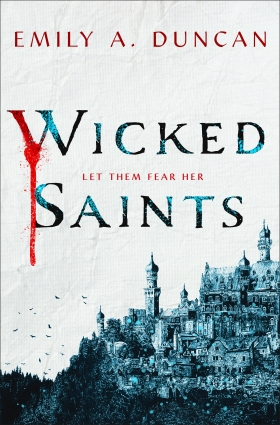 Wicked Saints by Emily A. Duncan

Reviewed by Sam! Thanks so much for letting us participate in the Blog Tour!!

Prepare for a snow-frosted, blood-drenched fairy tale where the monsters steal your heart and love ends up being the nightmare.” – Roshani Chokshi, New York Times bestselling author of The Star-Touched Queen

A girl who can speak to gods must save her people without destroying herself.

A prince in danger must decide who to trust.

A boy with a monstrous secret waits in the wings.

Together, they must assassinate the king and stop the war.

In a centuries-long war where beauty and brutality meet, their three paths entwine in a shadowy world of spilled blood and mysterious saints, where a forbidden romance threatens to tip the scales between dark and light. Wicked Saints is the thrilling start to Emily A. Duncan’s devastatingly Gothic Something Dark and Holy trilogy.

**I received an early copy of this book from the publisher in exchange for an honest review. We’d like to thank Wednesday Books and Emily for the opportunity. This book comes out on April 2, 2019 and you can get it here.**

What I drank prior: We went to Galentine’s Day tea and then out to several bars to go DC Passporting. Beer, Wine, Cocktails, the works. The cocktails were fab.

Spoiler-free Overview: Alright, so how do I explain this book. So we’ve got two countries who are in a religious war. Nadya’s country believes in the gods, and it just so happens… she can speak to them. This makes her valuable to her country and she’s being hidden from the other country. Serefin’s country. Serefin is the crown prince, a war hero, and a powerful blood mage. He’s called back from the front by his father to find his bride. Serefin’s country doesn’t believe in the gods, and they’ve figured out how to do blood magic. Nadya is forced from her home by Serefin’s forces and she runs into Parj and Rashid (foreigners) and the broody Malachiaz. Nadya and squad have decided that enough is enough and are going to infiltrate Serefin’s country to end the war. This book is gory and gothic af.

Spoiler-free Thoughts: Look man, this book was everything I wanted Grisha to be and so much more. It had is moments where I was confused, but I ADORED this book. The broody angsty romance and the fierce fierce friendships. There’s a m/f platonic friendship. I love BOTH sides of this story. The world is beautiful. The writing is great. The banter is fan-fucking-tastic. LOOK. Ugh ok. It’s the best.

Characters: Nadya is great. She’s a little too trusting at times, but I feel like most of us are. I love her conversations with the gods. I love the team that she’s with. Serefin is fabulous. All he wants is to help his country. To be a good king, to end the war. His bff Ostyia is also wonderful and i LOVE their friendship so flipping much. and guys. Malachiaz. MALACHIAZ. He’s just so broody. Do we trust him? Do we not? We probably shouldnt, but like, we do? BUt we also don’t? He’s just a dark and twisty man possibly doing dark and twisty things.

Plot: I liked this plot a lot because it was absolutely not predictable at all. We are thrown into this story first thing and it’s really fast paced. I could not put it down.

World Building: This world is very clearly Russian (Sober note: it’s definitely Eastern European… not Russian – Sober Sam) inspired and it’s stunning. This is such a well thought out world, but damn is it DARK. I love the magic, both the gods and the blood magic.

What to pair it with: Blood red wine. The darkest red wine you can find.

We actually had the chance to ask Emily what alcohol she’d pair Wicked Saints and she answered “Straight! Vodka!”

COMMENT DOWN BELOW: What is your most anticipated release for 2019?? 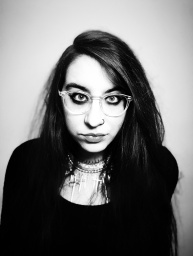 AUTHOR BIO: EMILY A. DUNCAN works as a youth services librarian. She received a Master’s degree in library science from Kent State University, which mostly taught her how to find obscure Slavic folklore texts through interlibrary loan systems. When not reading or writing, she enjoys playing copious amounts of video games and dungeons and dragons. Wicked Saints is her first book. She lives in Ohio.