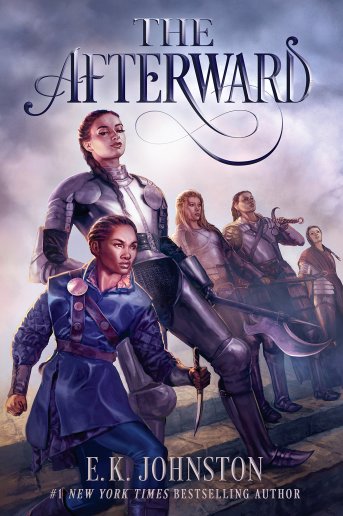 The Afterward by EK Johnston

**We received an early copy of this from BookishFirst in exchange for an honest review. We’d like to thank Kate and Dutton Books for Young Readers for the opportunity. This book comes out Feb 19th and you can get it here**

What I drank prior: I just went to a Happy Hour at a new cocktail bar. Ordered one that seemed tasty only to figure out it was LITERALLY ALL LIQUOR. And I hadn’t eaten. So i took it a bit slow and had two more glasses of wine.

Spoiler-free Overview: So have you ever wondered what happens to the squad after a quest is over? Does the leader get the girl/boy? Does the wizard go back to wizarding? Does the thief go back to the streets? Welp, this book is about The Afterward (get it?). It’s about what happens to the squad after they’ve saved the world. Told in two timelines, Before and After. The main two points of view are Olsa and Kalanthe and our story begins with Olsa getting caught stealing… again… and getting pardoned… again… because she’s a #hero. Kalanthe is just waiting for her birthday so she can officially be knighted by the queen, who just so happens to be the leader of the squad that saved the world. Did I mention all of the squad were women except the wizard? No? Well all of the squad were women except the wizard, Ladros. Just one thing about Kalanthe though, in this world, you gotta be super rich to be a knight cause armor aint cheap. So, in order to pay off her debt she gotta get married and use… get this… HIS dowry to pay it off. BUT she in lurve already… with Olsa…. And so the story goes.

Spoiler-free Thoughts: This book was like YA fantasy candy. I love when you come into books and characters have a #past. I love when the world is already built and the reader is left to figure it out for themselves (and we’re shown the world instead of told). This book was excellent. It addresses a ton of social issues without feeling like you’re being hit in the face. There is LGBTQ+ rep. I noticed lesbian, bi, ace, and trans rep, plus I’m sure there were others. There was discussion over immigration and touches on privilege. But again, didn’t feel like you were smacked over the head with it, it was intricately woven into the story.

Characters: I love my leading ladies. Kalanthe and Olsa are well defined characters with great character growth. And since you get to see the Before, you also get to see how they and the others changed from Before to After and by the end of the book. Erris is also an amazing character and mentor for the team. Ladros is a crazy wizard man but in such a stereotypical way that it was funny. It felt super refreshing to be in this high-fantasy world with badass and fierce women. I would not want to be on their bad sides.

Plot: Since the #quest was already over, this was more about… “ok what happens now?” Kalanthe has a marriage proposal that she’s gotta deal with, but feels guilty leaving Olsa alone. Olsa is #proud (Editor’s Note: wow, you were in a hashtag mood last night huh?) so she’s not accepting help from anyone, but her former street lord is being a dick and setting her up. All of a sudden Ladros (wizman) shows up and asks Olsa for her help, so she leaves with him. Well, she was actually in prison and Ladros sort of show sup and walks out the door with her lol. Anyway, it was a little slow at times but nto so slow i lost interest. The end was pretty great too. Heart eyes.

Writing Style: This book is a fast read, and I think it’s because it’s bordering on MG/YA. There’s some mature content but it feels more like MG.

World Building: It was beautifully shown to us rather than told. The magic in it is interesting, not really explained super well but it wasn’t really central to the story. We were expected to just go with it, rather that know specifics and that worked for me.

What to pair it with: A fresh sparkling Rose. It wasn’t the best thing I’ve read in the last few months but I enjoyed the hell out of it.

COMMENT DOWN BELOW: What was a book that surprised you recently?

One thought on “DRUNK REVIEW: The Afterward by EK Johnston”