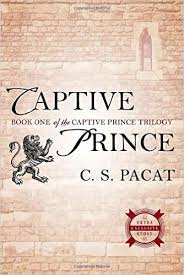 What I drank prior: 3 glasses of wine and I think i’m on beer 5. Today was such a shit day…

We meet our main character Prince Damen as his bastard younger brother sells him into slaver in his rival kingdom. He’s basically sold to their prince, Laurent. Slavery and D don’t get along well. Slaves are treated differently than in his kingdom where they are revered and treated well. Here they are pets and sex slaves. Raped for entertainment, forced to rape EACHOTHER for entertainment, etc. The whole thing is really tough. Anyway, Damen is tryna figure out how to save the other slaves that were sold AND figure out how to escape. All while having some ersious Stockholm for Laurent and thrown into the center of court politics. Things happen.

Spoiler-free Thoughts:
This…. was really hard to read guys.Pacat does NOT shy away from violence or gore. Seriously. Also, its hard to get yourself in the right mind-set to be able to deal with the slavery bit. Slavery is accepted in this world, so its important to accept it as a reader. This is NOT a “slavery is bad” novel.

But, once you get you brain right… the story is quite intruging. I am interested to find out what happens next.

Characters:
These guys are very well written and developed in such a way that feelings are had all around.

– Damen: He’s cool. He’s got Stockholm… but he’s cool. He’s a good pricne. caares about his people more than himself. what you’re supposed to do.
– Laurent: somethin’s goin on with this dude… and idk what it is. He’s fucking brutal though.
– Radel: Hate, but intentionally.
– Kathos: I wanna actually meet this dude
– The Regent: why you gootta care about your nephew’s pet? why you gotta be this way?

Plot:
This is way more of a character driven story than plot driven, but its not like nothing happens. There are plot points that make you want to cry and hug your friend/family/society/and all humans because we’re nto treated this way. But there are also times where you’re like… all smug and shit because someone was outsmarted. Really well done.

World Building:
I want to say its well done, because I was able to accept cettain things without question. He prepared me well enough for what’s going on. I want to know more too about the other kingdoms.

No spoilers today, I’m going to read the other books and review those, that’ll be where they come in.

What to pair it with: Tequila, straight up with NO LIME. Hits you right in the throat and then you get all the feelings you didn’t know you had without it.

COMMENT DOWN BELOW: This book has some controversy surrounding it. What did you think? Also, what books made you uncomfortable but you actually end up enjoying??

Until next time, I remain forever drunkenly yours,
Sam

One thought on “Captive Prince by C.S. Pacat”