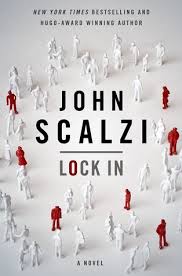 Lock In by John Scalzi

What I drank prior: Its a very special Doctor night. It’s Parker’s bday and we both get to telework tomorrow. I’ve had 3 generously poured fruity tequila drinks and 2 beers. Working on beer 3.

Spoiler-free Overview:
So this is a post-plague whodunnit book. The world was struck with a disease who’s end stage essentially causes the victim to be ‘Locked in.’ Their minds still work but they lose all control of voluntary movements. In response, this tech corp developed a robot-type thing called a threep that connects with the mind of the locked in person so they can move around and function in society. Anywho, our MC Chris is starting their job at the FBI when someone is murdered. They have to figure out what happened and there are conspiracies and stuff. My tweet about it was like “A Scalzi written sci-fi mystery? I’m in.”

Spoiler-free Thoughts:
I fucking adored this. Gobbled it up. We read it for book club and the feeing were pretty mutual.

Characters: I loved the characters. Our main character Chris is the best. We don’t know if they’re male or female. But they are very well developed. So is their partner Vann. She’s cool as shit and #damaged but at least we get to figure out why.

Plot: very fast paced story. Not predictable but also not jump out of your skin i need to know right now. It was great.

World Building: SSo well done. The first couple pages I had to reread because I thought I missed something. But I didn’t, and the info I was craving was given to me at the right time. I loved it. Also it’s in DC where we live and it got it right. So refreshing.

What to pair it with: Scotch and soda with lime. The perfect D.C. drink.

COMMENT DOWN BELOW: How did you read Chris, as a man or a woman? What did you think?

PS. Also, if you haven’t signed up for #Booziebookathon 2017 on July 22, see our announcement post here.

One thought on “Lock In by John Scalzi”