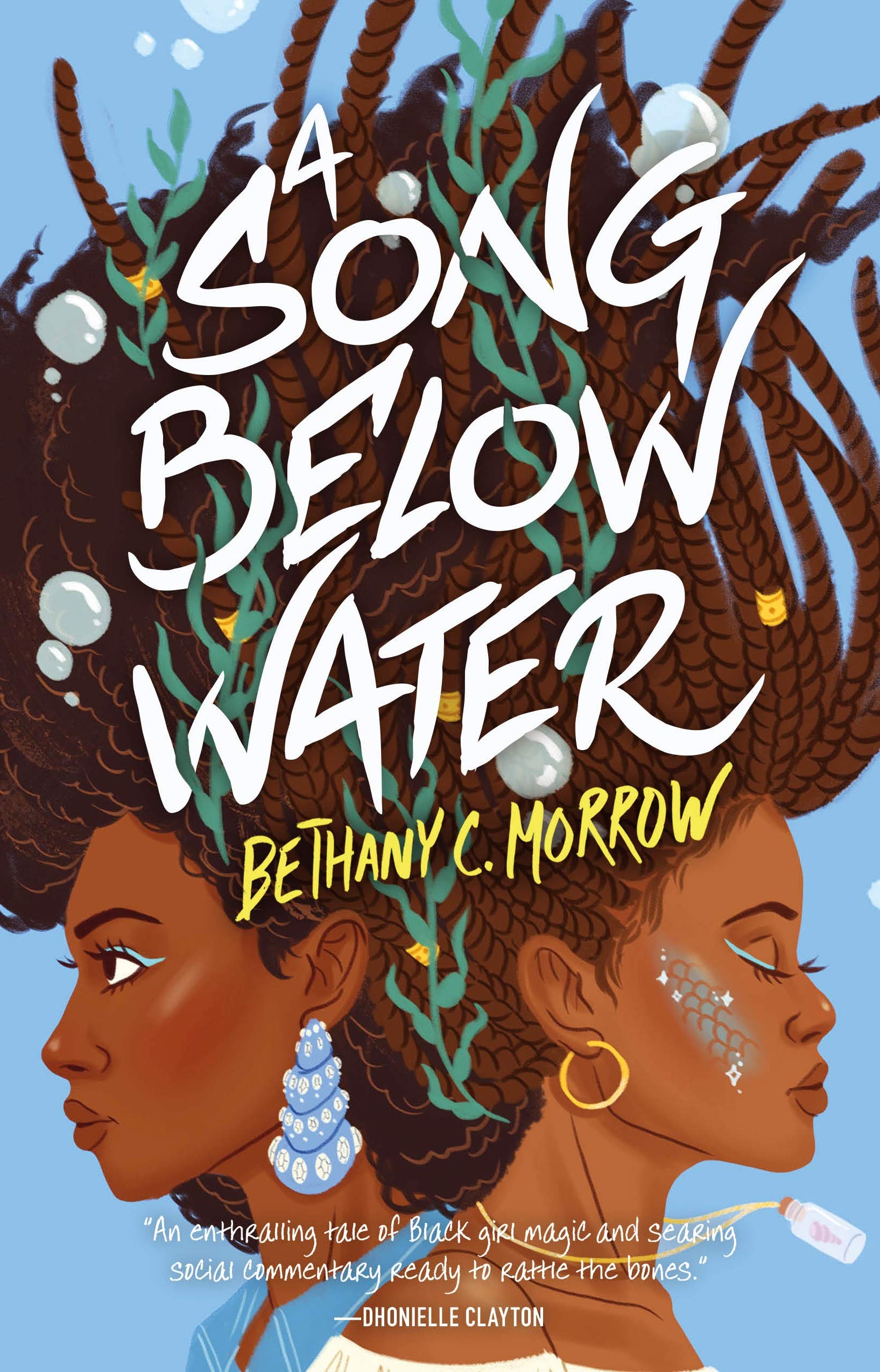 A Song Below Water by Bethany C. Morrow

**We picked up an early copy at ALA. We’d like to thank Bethany and Tor Teen for the opportunity. This book came out on June 2nd and you can get it here or at your local independent bookstore**

What I drank prior: ive had pretty much the work week from hell. But today was week one of virtual bar trivia and I drank probably a whole bottle of wine. Except Ginny and I had a bottle of white and a bottle of Prosecco. So. The fact that I’m not hammered is probably not a good thing. What’s that? Denial? Hey nice to see you again.

Tavia is already at odds with the world, forced to keep her siren identity under wraps in a society that wants to keep her kind under lock and key. Never mind she’s also stuck in Portland, Oregon, a city with only a handful of black folk and even fewer of those with magical powers. At least she has her bestie Effie by her side as they tackle high school drama, family secrets, and unrequited crushes.

But everything changes in the aftermath of a siren murder trial that rocks the nation; the girls’ favorite Internet fashion icon reveals she’s also a siren, and the news rips through their community. Tensions escalate when Effie starts being haunted by demons from her past, and Tavia accidentally lets out her magical voice during a police stop. No secret seems safe anymore—soon Portland won’t be either.

Drunk Overview: this is a contemporary urban fantasy that stars our main characters Tavia and Effie. Tavia is a siren in hiding. In this world, sirens are basically killed or don’t speak cause they can make you do what they want. So folks are terrified and they’ve all gone into hiding. The other is basically her sister, but isn’t actually but is living with Tavia and her family for some reason. Anyway, there’s a case going around that says that a woman who got murdered by her bf was a siren and so the bf is going to get off scott free. Sound familiar yet? She’s a siren so she deserved it. Anyway, stirs up (justified) protests fighting for siren rights. Oh did I mention all sirens are black women? No? Well they are. So Tavia is working through her feelings on the whole situation, and Effie is going through something weird. She doesn’t know what, though. So there’s our story.

Spoiler-free Thoughts: This is the single most important book I’ve read this year and it came at the exACT right time. This book is all about injustices that are delivered to black folk in this country but instead of it being about skin color it’s about what mythical creature you are. I’ve said this before and I’ll say it again, as a white woman I am incredibly privileged in how I live my life. Please go and check out some reviewers of color for this book. I’ll do some sober research to find some.

This book was phenomenal and it should be required reading.

Characters: What I loved most about this book was that while the characters are going through some real tough shit like discrimination and racism and police brutality, they’re also going through teenage stuff like boyfriends and bullies. Like. Yes. Teenagers deal with ALL OF THAT in the course of a single day. This book doesn’t skimp out on telling us that. Tavia and Effie are brilliant, balanced characters and I love them so much. SO SO MUCH.

Plot: Boy was this a ride. There was so much going on but nothing ever took from something else and it was well paced and it was RAW and REAL and I just loved it. CAN YOU TELL I LOVED IT?!

Writing Style: I actually have no comment here. I gobbled this up so fast I didn’t have time to notice

World Building: So, I think it did ok with world building. It was good at showing us what a siren was, but some of the other magical mythical types were uncommon and I struggled with it. Only knwe that the one was supes special for some reason.

What to pair it with: A nice, crisp, clean hefeweizen. It feels very summer-y and chill but can still fuck you up with the high ABV.

COMMENT DOWN BELOW: If you’ve seen an own voices review, please leave it below and I’ll be sure to link it above and share it on all the socials. I’m excited for this. It is SO. GOOD.