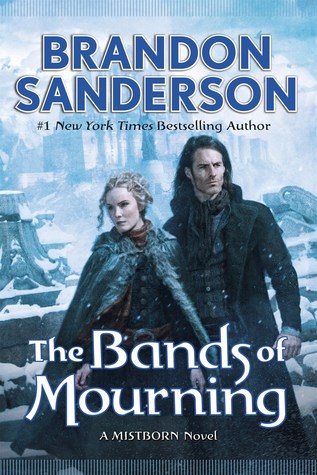 Bands of Mourning by Brandon Sanderson

What I drank prior: beer. I hope Im not ruining anything by saying I ended up writing this after one of the World Series games. But it was a game that was great and only improved with a few beers. They were funky sours. Surprising amount of Rye bit really plesant adter the initial surprise

Three hundred years after the events of the Mistborn trilogy, Scadrial is now on the verge of modernity, with railroads to supplement the canals, electric lighting in the streets and the homes of the wealthy, and the first steel-framed skyscrapers racing for the clouds.

The Bands of Mourning are the mythical metal minds owned by the Lord Ruler, said to grant anyone who wears them the powers that the Lord Ruler had at his command. Hardly anyone thinks they really exist. A kandra researcher has returned to Elendel with images that seem to depict the Bands, as well as writings in a language that no one can read. Waxillium Ladrian is recruited to travel south to the city of New Seran to investigate. Along the way he discovers hints that point to the true goals of his uncle Edwarn and the shadowy organization known as The Set.

Drunk Overview: cool. Where to start. A wedding doesn’t happen and instead of dealing with the whys literally all of our characters pick up to go search after a rumpred arftifavt thay may or may not wxist except Waxs uncle is after it and it turns out (not surprising) thay Waxs sister is still alive. Also it turns oit there are other worlds (also not a surprise) and their god/gods sound vaguely familiar)

What to pair it with:a fancy hot toddy. Something slightly restorative that makes you feel warm, but with its own unique thing.

One thing I enjoy about these reviews are the fact that its hard for people to tell if I legitimately dont know how to spell or if its just thay Im typing this on a phone after plenty o beer.