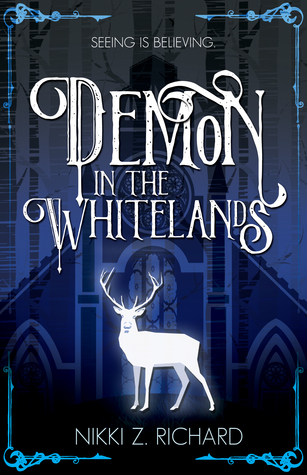 Demon in the Whitelands by Nikki Z. Richard

**We received an early copy from ALA in exchange for an honest review. We’d like to thank Nikki and Month9Books for the opportunity. This book comes out on Sept 24th and you can get it here**

DEMON IN THE WHITELANDS is LET THE RIGHT ONE IN meets INTO THE FOREST, a debut YA novel from Nikki Richard.

Sometimes no matter how hard you try, some things cannot be explained.

Sixteen-year-old Samuel, son of devout cleric, has endured shame and prejudice his entire life. Although he is destined to become clergy too, he longs for an ordinary life in the whitelands away from demons and holy roots.

When the mayor claims to have captured a mute demon girl, Samuel is forced to become her caretaker. But as Samuel gets to know the prisoner, he finds her not to be very demonlike. Instead, she is intelligent, meek, and an exceptional artist. Despite her seeming goodness, some more concerning things cannot be explained. Samuel is hard-pressed to reconcile her uncanny strength and speed, missing arm, ambiguous gender, and the mysterious scars covering most of her body.

Samuel forms a deep attachment to the girl with predator eyes and violent outbursts, against his father’s advice. Their friendship could turn into something more. But when Samuel discovers the mayor’s dark intentions, he must decide whether to risk his own execution by setting her free or watch as the girl is used as a pawn in a dangerous game of oppression, fear, and murder.

What I drank prior: Several glasses of wine and a shot (Ginny mademe take the shot cause I said I wasn’t drunk enough) still don’t quite feel drunk enough but /shrug emoji/

Spoiler-free Overview: so this is sort of a post apocalyptic world where technology is banned and North America is split into 3 states, the whitelands, the redlands, and… somewhere else. Our man Samuel is the cleric’s bastard son. In this, clerics aren’t allowed to be touched ever. And so, neithe is Samuel. When all of a sudden the mayor finds this girl with half an arm and calls her a demon, Samuel is given the job of babysitting her. This is basically a coming of age but not? Idk.

Spoiler-free Thoughts: it was… meh. I just don’t quite feel like anything happened at all.

Characters: Samuel is an ok character I guess. He has a full character arc bjt km just not sure how… much? And then there’s the girl… she’s… a mystery, but I guess that’s what we’re supposed to think. There’s the town drunk sherif man who is a stereotype and then the power hungry mayor and his innocent son. Def some content warnings for parental abuse here. They just don’t quite feel real I guess.

Plot: did anything actually happen in this book? I mean, definitely character driven, but… it felt like half a climax…

Writing Style: the writing style was cool. I really enjoyed that part. Being up north in basically only winter was a great way to play with metaphors.

World Building: I was super interested in the world. Def showing not telling, but I find that I care more about what happened before this story (which I didn’t get answered) than I did about the story… yikes.

What to pair it with: this is… a vodka orange… a drink you think you’ll like when you’re first starting to drink but then slowly realize it’s not actually tasty.