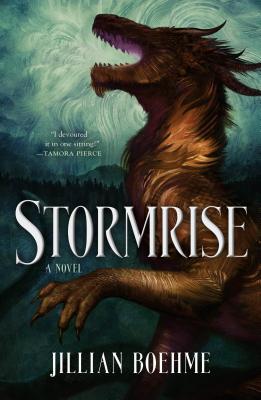 **We received an early copy from ALA! We’d like to thank Jillian and Tor Teen for the opportunity! This book comes out on Sept 24th and you can get it here**

A combat warrior will risk everything to awaken the dragons and save her kingdom in Jillian Boehme’s epic YA Fantasy debut, Stormrise, inspired by Twelfth Night and perfect for fans of Tamora Pierce.

If Rain weren’t a girl, she would be respected as a Neshu combat master. Instead, her gender dooms her to a colorless future. When an army of nomads invades her kingdom, and a draft forces every household to send one man to fight, Rain takes her chance to seize the life she wants.

Knowing she’ll be killed if she’s discovered, Rain purchases powder made from dragon magic that enables her to disguise herself as a boy. Then she hurries to the war camps, where she excels in her training—and wrestles with the voice that has taken shape inside her head. The voice of a dragon she never truly believed existed.

As war looms and Rain is enlisted into an elite, secret unit tasked with rescuing the High King, she begins to realize this dragon tincture may hold the key to her kingdom’s victory. For the dragons that once guarded her land have slumbered for centuries . . . and someone must awaken them to fight once more.

What I drank: white wine. I was alone tuis weekend which meant I cooked way too mich food (this time I have the excuse of preparing for family having a baby soon), watched way too much d&d, and got happily drunk by myself.

I’m gonna give you a rundown of some of my thoughts:

World building: I want to specifically say something here because I camt tell if the book itself had good world building or if I was filling in blanks from my Mulan expectations. There were sections that the author filled in really well. But I think this could have been more clear cut either with some additions to bring this further away from the Disney movie or to give this book and its locations its own flair.

What I would pair this with: I feel like the easy cheap answer is sake. But really the people in the book, mostly soliders are given alco hill ol rations that clearly aren’t the worst (i.e. not Natty Light) but arent the best (insert craft beer of choice) so I think this gets a dat tire. Something very basic that at times is exactly what you want but is otherwise an easy drinking beer.

Sweet drinking and have a good night!