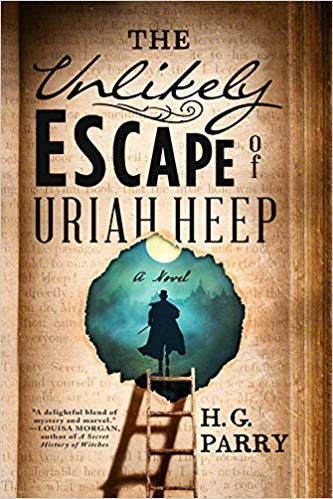 The Unlikely Escape of Uriah Heep by H. G. Parry

**We picked up a copy of this from ALA! We’d like to thank H.G. and Redhook for the opportunity to review. This book comes out on July 23rd and you can get it here!**

The ultimate book-lover’s fantasy, featuring a young scholar with the power to bring literary characters into the world, for fans of The Magicians, Mr. Penumbra’s 24-Hour Bookstore, and The Invisible Library.

For his entire life, Charley Sutherland has concealed a magical ability he can’t quite control: he can bring characters from books into the real world. His older brother, Rob — a young lawyer with a normal house, a normal fiancee, and an utterly normal life — hopes that this strange family secret will disappear with disuse, and he will be discharged from his life’s duty of protecting Charley and the real world from each other. But then, literary characters start causing trouble in their city, making threats about destroying the world… and for once, it isn’t Charley’s doing.

There’s someone else who shares his powers. It’s up to Charley and a reluctant Rob to stop them, before these characters tear apart the fabric of reality.

What I drank prior: Wine, wine ,wine, wine. Curtesy of vacation sponsoring when did I open all of these cabinets?

Spoiler-free Overview: This was a book Sam receieved at ALA but knew she couldnt read before it came out so I am the lucky recipient. The main character is Robert, his brother Charley can read characters out of books. Hes focused on the Victorian era so theres plenty people you wont recognize. But don’t worry. Sherlock Holmes shows up on the regs. It turns out that theres another person with that avility who has fecided to bring on the “new world”

Spoiler-free Thoughts: Im going to start with I cant tell jf I would have enjoyed this more if I was more familiar with Victorian novels specifically Charles Dickens. Ive never had the patience for Oliver Twist much less one od the ones that hadnt been made into a play/movie. I still did really enjoy this book. I think its really rare to have a book that isnt techincally from the perspectice of the expected hero. Typically Charley would be the hero, and yet its his brother who we’re following. You get into it and this book is a fascinating look at how siblings relate to each other. As someone who came to appreciate their siblings so much more in the lasy decade I do enioy things that look at the long lasting impact of sibling relationahips.

Characters: theres a lot of literary characters and I think some of them are made up but honestly I dont know. I really enjoyed that the characters that have been read out have their iwn personalities depending on the interpretation of their reader. Robert fit what I would have expected from this role and what you might exoect od the older sibling of someone considered exceptional. The stressors between Charley and Rob felt very real to me. The supporting cast of chatacters in many ways isnt all that necessary. There’s a slate of fictional characters that fulfil their roles including Millie, a Nanchmy Drew esque character Charley read oit as a child. Shes the strongest female presence in this book as there was far too little of Robs serious Girlfriend Lydia

Plot: the plot kept me guessing. I kept thinking I knew what was happening and then I would be dead wrong

Writing Style: good? This part is not my jam

World Building: one of the main facets of this book is that there is a fictional Street that was read into being anf boy did I want to hear more about that. The book was based in New Zealand but could have been set in pretty much any city.

What to pair it with: martini with a twist. Theres a lot of ckassic elements with some modern stuff thrown in.