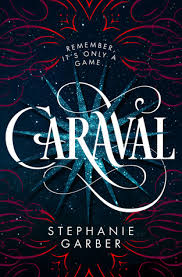 Spoiler-free Overview:
So… The above was all i had written… so I guess I need to start this again…

What I drank prior: Happy hour with my boss, then I came home and finished a bottle of wine off..

Spoiler-free Overview:
So there are two sisters Scarlet and Tella. They’ve always wanted to go to Caraval, a magical circuis thing. Run by this guy Legend who is mysterious and brooding. Well that’s how i imagine him because we never actually meet him. But anyway, they live with their super-duper abusive father, and Scarlet is about to enter into an arrainged marriage to get away from him. When one day, tickets arrive to go to Caraval. They basically get stolen by this OTHER mysterious and brooding charachter, Julien, to go to the circus.

WHen they get there Tella is kindapped and she becomes the center of this whole game, basically a big game of “find the girl.” Everything kinda goes from there…

Spoiler-free Thoughts:
I enjoyed this to an extent. It’s now been a few weeks since I read it and I’m seeig more and more issues with it.

Some off-point comments: at one point Scarlett gets this dress that changes with her mood and i fuggin love it. Also, I have a note here in my bullet journal that says “Who the eff is Legend?”

Characters: I’m going to go through them one by one, but overall I didn’t like the development of the characters. Not enough backstory to justify their behavior.
– Scarlet: So she’s the only one that grows. I love how she starts to understand that she isn’t under dadd’ys awful thumb anymore and she learns to do things on her own. However, i will say she’s still really stupid.
– Tella: She really annoyed me. Like… really.
– Julien: I like him
– Dante: Uh… ok? I know he’s supposed to have a purpose but I just don’t know what it is.
– Daddy and Duke: WHAT THE ACTUAL FUCK? They are the villians but like… why? I don’t understand why.

World Building: I wish i got to see more of the circus. The whole point of the games are to find Tella then why don’t we see everyone running around trying to find her? But the whole concept is really good.

Plot: I felt like the plot was pretty well paced. I was never really bored, nor was i like… slow the fuck down.

What to pair it with: Something with a lot of rum and a fancy umbrella

2 thoughts on “Caraval by Stephanie Garber”