This is a goddam undertaking. Brb. I gotta go drink about thinking about writing about all these pages.

SOOOOOOOOOO I started wheel of time guys. I love fantasy, so it was like, time, I guess, or something. I’m gonna break up thes posts into 6 pairs, so I dont want tokill myself. This might change. Depends on rand and the team. Fornow, this fits. Lets see what Robert Jordan is working with 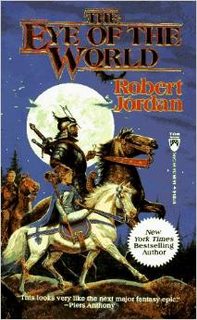 Sam Here: Also known as Eye of the World

WOT 1: Im tiiiiiiired of the prologue/exposition of all these fantasy novels wherin a lil country bumpkin gets sucked into something bigger than him/herself, but hey, the trope works, and fuggit, it is what it is. When the 8 foot tall half-animal, murder loving “trollocs” attack the town of Two Rivers, Rand, Mat, and Perrin, get, “rescued” by this witch on the side of The Light, Moraine, and her Gunslinger Roland/human-knife, Lan swept up into a motherfucking adventure to go see the like biggest town in the country as far as they know. Why they have been selected to go is what drives the plot of the novel, and I think it’s effective.

They meet a team of characters, for good or ill, and a lot of these characters are real fucking funny, especially Thom the “gleeman”, a musician/bard with ninja knife skillz, and Lolai, the 90 year old teenage 8ft tall nerd. I lol’d a lot when reading this novel. Like in public, on the metro, looking like a loon. the degree to which this first novel is Lord of the Rings is is obtuse, however, I’m still compelled. Rand ends up having the worlds weirdest dreams featureing, like, satan, and I wanna see how they cope, I wanna know who is Samwise Gamgee, and I realy wann know if Morraine and the squad of Aes Sedai are as manipulative as they seem. I can tell something is developing there….

Will Rand’s betrothed, Egwyne give him the cheeks?! Will the town wise-woman, “the Wisdom”, Nyneve ever NOT be an insufferable bitch? Read and find out. And then read some more. Like few thousand pages more. I mean. This is book one. One has to soldier on regardless, I suppose. There are twelve of the fuckers after all.