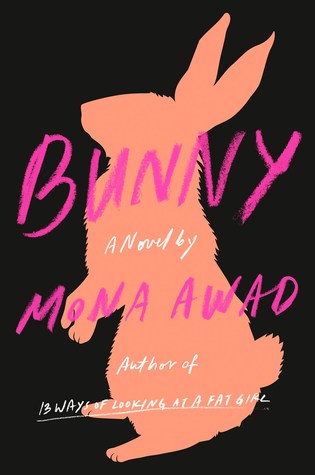 Review by linz, who would like to point out that this book was especially scary because there was an incursion of bunny rabbits in my yard around this time.

What it’s about (from goodreads):

Samantha Heather Mackey couldn’t be more of an outsider in her small, highly selective MFA program at New England’s Warren University. A scholarship student who prefers the company of her dark imagination to that of most people, she is utterly repelled by the rest of her fiction writing cohort–a clique of unbearably twee rich girls who call each other “Bunny,” and seem to move and speak as one.

But everything changes when Samantha receives an invitation to the Bunnies’ fabled “Smut Salon,” and finds herself inexplicably drawn to their front door–ditching her only friend, Ava, in the process. As Samantha plunges deeper and deeper into the Bunnies’ sinister yet saccharine world, beginning to take part in the ritualistic off-campus “Workshop” where they conjure their monstrous creations, the edges of reality begin to blur. Soon, her friendships with Ava and the Bunnies will be brought into deadly collision.

What I drank: i’m gonig to DRAGONCONNNNNN and we had a costume planing mtg and we drank aperol spirztes and wine and also wine BUT everyne ate dinner and also had water this time so points to me

tf did i just read. this book isnt for everyone i’ll saty htat now.

that being saud i was ENTRALLED. samanntha is a wildly unreliable narrator and the lin e between truth and fiction is blurred a lot. theres so much great werid drescriptive language and imagery throught the novel. the Bunnies are a fun darnk twist on the clique concept, and i lvoed their voices. it wasn’t waht i was expecting and i had no idea where the story was going and it was all VERY excitign.

donwside, and for me its a big one – the clique si made up of four girls, and to borrow from mean girls, its basically two karen smiths, a gretchen weiners, and a regina geroge. i caught onto their personalities right way, they were really disticnt, but i kept invisioning them all as blond and preppy when they arent. The author describes them well, but those desciptions come awhile after we meet them, and the imagery she initally uses sets up a different mental image that i kelpt having to stop and re-set before i could move on. it was more work than i was expecitng to do. additionally, samanta’s entry point into the Bunnies – the smut salon – is mentioned several times early on bythe other cahracters, held once with samantha in attendance, and then never brought up again. i whish, like, at least one more salon had been held to round out the point, or that the conceptt hadnt been used at all.

What I’d pair it with: there’s actually 2 drinks specificayly mentioned – a cocktial the BUnnies invent for sam, and a Lgiht and stormy. I do not know how t make either (CALL ME, MONA AWAD), so id pair it w a choc cake shot – it does NOT taste like it should but youre not mad at it