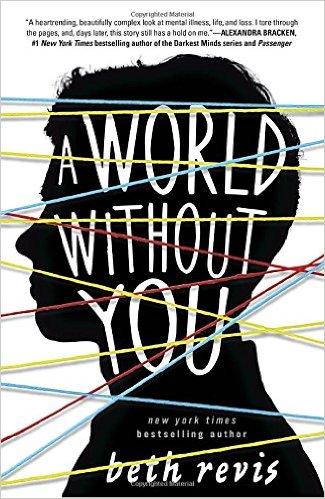 A World Without You by Beth Revis

What I Drank Prior: Tequila. A lot of tequila. I wish i knew how much, but i don’t cause Parker poured. Not my fault.

Spoiler-free Overview:
Hokay, so this book is about a boy named Bo who thinks he’s a super hero. He thinks he has the ability to travel in time. He thinks he’s at a school for kids who also have super powers. Obvioulsy by all of the “thinks” you understand that he’s not actually an x-man.

This story is in the POV of both Bo and his sister. According to Bo, the love of his life, Sofia, is trapped in time, and everyone else seems to think she’s dead. Bo is determined to save her. Thingsssss happpennnn

Spoiler-free Thoughts:
Let’s just say I finished this book in one sitting. This book isn’t defined as “short” it’s just really really engrossing. I was taken in very quickly. Like, I thought that MAYBE it wasn’t mental illness. That it could possibly be something esle. Be cause the main POV, Bo, is SO unreliable. I am a sucker for unreliable narrators.

Characters: Alright, so look. Patrick (my brother) if you’re reading this, please don’t take this the wrong way. I read this book, and the sibling relationship in it was so fucking relatable. Like, my brother and i are fine, we’re not like, lovey-dovey or whatever, but we’re fine. If you take it one step forward, and you get the characters in this novel. A paraphrase is like “we’re to separate people living our own separate lives and just happen to have the same genetic code.” Now, Pat and I aren’t like that, Bo and his sister are. But if my brother and I had one wrong move sometime in the past, it would have led us there. I related SO hard to these characters.

Side note: I really appreciated how it showed how a whole family is effected when one is mentally ill.

Plot: The plot to me wasn’t the biggest part of this book. Like it was there, and it was important, and some things happened but like, it was so character driven that i just… yeah

Writing Style: tbh, like to be COMPLETELY honest, it wasn’t the best. It wasn’t beautiful, it wasn’t metephorical or whatever, it was just fine. To me, the characters are really what made this story.

I’m not going to write a spoiler-y section because I don’t have much to say, but what I do have opinions is with the message this book addresses. See. Below.

Message: Look. THis book is about mental illness. And I had the pleasure of reading the annotated version from the Quarterly Co. box. As someone who has a degree in Psychology, i think it was an excellent portrayal of how mental illness can effect a family. It was very interesting to see into the mind of someone who is mentally ill. Now, I thought maybe I was gonna be all like “i loved seeing how they think.”

Just read it, ok? Like, it’s good for everyone.

What to pair it with: Tequila. Because tequila makes us all a little mentally ill right? We never really know what’s true or false.