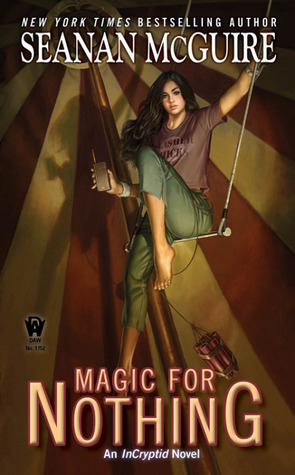 Magic for Nothing by Seanan McGuire (inCryptid #6)

What I drank prior: twas a wine night with plenty of pinot grigio.

As the youngest of the three Price children, Antimony is used to people not expecting much from her. She’s been happy playing roller derby and hanging out with her cousins, leaving the globe-trotting to her older siblings while she stays at home and tries to decide what she wants to do with her life. She always knew that one day, things would have to change. She didn’t think they’d change so fast.

Annie’s expectations keep getting shattered. She didn’t expect Verity to declare war on the Covenant of St. George on live television. She didn’t expect the Covenant to take her sister’s threat seriously. And she definitely didn’t expect to be packed off to London to infiltrate the Covenant from the inside…but as the only Price in her generation without a strong resemblance to the rest of the family, she’s the perfect choice to play spy. They need to know what’s coming. Their lives may depend on it.

But Annie has some secrets of her own, like the fact that she’s started setting things on fire when she touches them, and has no idea how to control it. Now she’s headed halfway around the world, into the den of the enemy, where blowing her cover could get her killed. She’s pretty sure things can’t get much worse.

Antimony Price is about to learn just how wrong it’s possible for one cryptozoologist to be.

Drunk Overview: this is the first book with Antimony which was really interesting as we had only seen her as a grumpy younger sisyer before. She goes undercover with the covenant and almost immediatley gets placed with a circus that might have supernatural leanings. Theres some detective work.

Spoiler-free Thoughts: seeing Antimony’s point of view is interesting after so many books of Veritys perspective. This book definitely gets into some uncharted territory. This book definitely made me think aboit what an interspecies relationship would be like, and to think about the boundaries that exist there. Even more than that this book looks at what an integrated human cryptid society looks like. For better and worse.

Characters: Annie falls into the category of everything hapoening to her being someone elses fault which is a cerry irritating, if true, charactdr flaw. Everything aboit her really fits with the rest of the series. I didnt like the other characters, shoet or long long lived as they may be. The circus ended up being a family I thought it would be interesting to live in.

Plot: this book feels like it has distinct sections in the best of ways. Being at home vs at the Covenant vs at the circus all feel sildly different. The pacing for this seemed fairly perfect and yet the ending still felt a bit abrupt. The thing I really enjoyed was seeing all of the ways Annie grew up both mentally and emotionally which was all tied directly into the plot.

World building: im not sure I felt thenworld was added too this much in this book. So much of the world in this was expected. The covenant was new and some of the cryptids were bew but overall I dont think this added much to the lore of this world

What to pair it with: old fashioned. Sweet with a kick

One thought on “DRUNK REVIEW: Magic for Nothing by Seanan McGuire (inCryptid #6)”