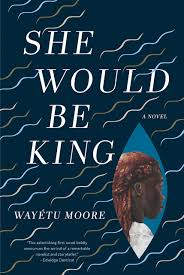 Wayétu Moore’s powerful debut novel, She Would Be King, reimagines the dramatic story of Liberia’s early years through three unforgettable characters who share an uncommon bond. Gbessa, exiled from the West African village of Lai, is starved, bitten by a viper, and left for dead, but still she survives. June Dey, raised on a plantation in Virginia, hides his unusual strength until a confrontation with the overseer forces him to flee. Norman Aragon, the child of a white British colonizer and a Maroon slave from Jamaica, can fade from sight when the earth calls him. When the three meet in the settlement of Monrovia, their gifts help them salvage the tense relationship between the African American settlers and the indigenous tribes, as a new nation forms around them.

Moore’s intermingling of history and magical realism finds voice not just in these three characters but also in the fleeting spirit of the wind, who embodies an ancient wisdom. “If she was not a woman,” the wind says of Gbessa, “she would be king.” In this vibrant story of the African diaspora, Moore, a talented storyteller and a daring writer, illuminates with radiant and exacting prose the tumultuous roots of a country inextricably bound to the United States. She Would Be King is a novel of profound depth set against a vast canvas and a transcendent debut from a major new author.

What I drank prior: Still pregnant. Still sober.

Spoiler-free Thoughts: This is a retelling of Liberia’s founding, something I was very unfamiliar with at the start of the book, with a twist of magical realism, a term I was also unfamiliar with but now love. This book had a lot going on, especially at the beginning, but I was there for it. Though it was a commitment to get through the introductions and the end was a bit too sudden for my liking.

Characters: In the introduction sections, we meet the three future founders of Liberia. Gbessa was cursed as a witch by her African village at a young age because of her red hair and ability to, uh, not die. June Dey is raised as a slave in America, eventually becoming a runaway, finding out he is invincible, and boards a ship to Africa during a post-slavery resettlement effort of sorts. Norman is a mixed-race boy from Jamaica whose mother just wanted him to live a free life and had special invisibility powers. Also, there is Charlotte who is basically the wind? Like I said, this book is kind of a trip.

Plot: Once each of the main characters overcome their obstacles, they find themselves in Western Africa in what will eventually be Liberia. The two men initially team up to use their powers for good to protect the surrounding villages, while Gbessa finds herself accepted by a group of former slaves from America who were sent to found a new nation. When both the tribes and the new settlement are under threat by slavers, the three rally to battle back the tide and protect the new nation and their found freedom.

World Building: The author did a wonderful job a describing a rich world and the potential of Liberia, and what it meant to each individual to be free. Each setting has its own culture, which I appreciated, especially the villages.

Writing Style: The story is beautifully told with a mix of descriptive elements and that magical realism thing. I did find the Vai language hard to follow at first since it was written in a sort of broken English, but eventually I caught on.

What to pair it with: A spicy tequila sounds about right. The magical realism gives it a real kick!

Rating: 4/5 shots – really enjoyed but dragged for me a bit in the introductions portion