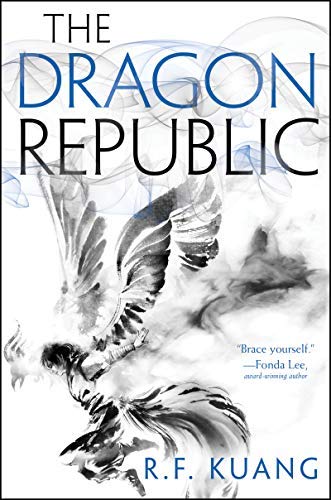 The Dragon Republic by R.F. Kuang

**We received an early copy of this from NetGalley in exchange for an honest review. We’d like to thank R.F. Kuang and Harper Voyager for the opportunity. This book comes out on Aug 6th and you can get it here**

The searing follow-up to 2018’s most celebrated fantasy debut – THE POPPY WAR.

In the aftermath of the Third Poppy War, shaman and warrior Rin is on the run: haunted by the atrocity she committed to end the war, addicted to opium, and hiding from the murderous commands of her vengeful god, the fiery Phoenix. Her only reason for living is to get revenge on the traitorous Empress who sold out Nikan to their enemies.

With no other options, Rin joins forces with the powerful Dragon Warlord, who has a plan to conquer Nikan, unseat the Empress, and create a new Republic. Rin throws herself into his war. After all, making war is all she knows how to do.

But the Empress is a more powerful foe than she appears, and the Dragon Warlord’s motivations are not as democratic as they seem. The more Rin learns, the more she fears her love for Nikan will drive her away from every ally and lead her to rely more and more on the Phoenix’s deadly power. Because there is nothing she won’t sacrifice for her country and her vengeance.

The sequel to R.F. Kuang’s acclaimed debut THE POPPY WAR, THE DRAGON REPUBLIC combines the history of 20th-century China with a gripping world of gods and monsters, to devastating effect.

What I drank prior: A bunch fo Rose Angry Orchards. Parker unexpectedly was here tonight so I had to drink I wanted something different. I can already feel the hangover… cool cool cool.

Spoiler-free Overview: So this is the sequel to The Poppy War so if you don’t want to be spoiled for that one… sry but I don’t have a drunk review for the first one. But otherwise, we got Rin, our mass murdering, shaman, opioid addicted, war criminal dealing with the aftermath of what she’s done. War is over, but not in her mind. She gotta deal with the Phoenix plus also the mother fucking empress who “ruined” her life. So, she joins up with some rebels, aka Nehza’s dad, and attempts to overthrow the world. The white people show up and shit goes from there.

Spoiler-free Thoughts: This was slower than the first book if you can believe that. But ultimately. more believeable. Rin is a #mess.  This book was a build up. A bunch happens but slowly. Sort of like act 2 of book 1, except a whole book of it. I’m really hoping we get a bit more action out of book 3.

Plot: This one was slower than the first. If you can make it to the final third, then you’re golden, otherwise, it’s chess piece. Making the characters move until they’re in the right place, and have learned the right things.

World Building: I think i get the world a bit more? It was definitely expanded in this one by the presence of the EVER FUCKING WHITE PEOPLE. Ya know, as they do, with their holierthanthou, technologically advanced selves thinkin cause they have the technology they’re above others. I know this is coming from a white person but i still fucking hate it. I hat eit more and more every day.

What to pair it with: This book is brutal. It doesn’t pull its punches. It’s not one but three long islands waiting to hit you in the fucking face.

COMMENT DOWN BELOW: What did you guys think of Poppy War? Our book club had a lively discussion about how far you can go without the ability to be redeemed.

3 thoughts on “DRUNK REVIEW: The Dragon Republic by R.F. Kuang”