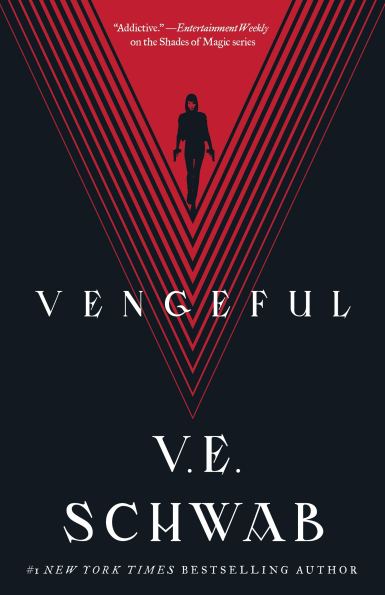 Vengeful by V.E. Schwab by Minda!

Spoiler-free Overview: This is the second installment of Vicious, which we read for book club earlier this year. We follow a few different ExtraOrdinary humans through their plights in their new-ish situations. The main building blocks of the plot revolve around college frenemies Victor and Eli, with new backstories and characters thrown in.

Spoiler-free Thoughts: I LOVED Vicious and was super excited for the follow up. Unfortunately, it didn’t really live up to my expectations, but I still enjoyed it. Thought it was a duology, but open ending makes me think not so much?

Characters: We were back at the vicious (get it?) rivalry between Victor and Eli, though Victor was a shadow of his former self—literally and figuratively. Sydney was going through some teen growing pains and figuring out the events of the last book. The rest of the henchmen were lovely and got their due. Detective Stell became more than what he was in the last. Didn’t care for new characters Marcella/June/Jonathan when it all came out.

Plot: I would have preferred we focused on the original (OG) character plot lines we knew in Vicious and less on the newer but ultimately less relevant plot line(s). Like, I get why Stell’s whole thing was there, but realistically how did Marcella fit in in the end?

World Building: I think there could be more here, but I think I’m good with what is there? Idk I still have so many questions. BUT I think the whole build up behind EOs is facilitating.

—SPOILERFS Don’t read! Or do, continue to not be you’re mom—

What I hated: The pacing/time jumping! I feel like this was all over the place in a way I did not feel last book. I had a really rough time keeping track of where each individual was at a certain point in time and it was semi- to medium- important to know. Also, the fact that we added new characters/POVs that were ultimately a letdown—seriously so common nowadays. I promise you, we don’t need a million characters to know what’s going on! And it really took away from Victor which was a trashed.

What I disliked: Marcella’s story. I was totally there for it when it started off. She was a complex villain who seemed to have a lot of depth, but then planned out to be very one-dimensional. Which I don’t think is the message, but maybe it’s too meta for me. I mean, we really didn’t need another reason for EON to be scared of EOs and I didn’t care at all about Merit’s mob scene and then I thought her death all went super fast. Either way, she took away from the stories that were more important to me. Also the ending? I wanted it to be more concluded than that.

What I liked: I liked Sydney’s coming of age story. She is having a hard time with the events from the last book, which to me make sense—she lost her sister which I can only assume is grammatically. But also June is a rando so why are you telling her everything? Idk teens are hard. I also was happy to just be back with all these characters generally.

What I loved: a few thing, but most of them had to do with the side characters we already knew. Mitch was still the best, though beside Syd I’m not sure why he was sticking around. He’s such a kickass character w/o being an EO. Also, Dom’s character arc. He started off as such a pathetic character in the last book and really built up into something bigger. AND THEN HE DIED. I was so upset. But I definitely dig his undercover EON thing. Also also, Eli & his backstory! I didn’t realize how much I wanted to know about this character, though the experiments and cutting himself were gruesome.

What to pair it with: A scotch you saved and were really looking forward to, but didn’t exactly meet your expectations.

Rating: 3.5/5 shots—This book is far from the worst sequel of the block, but it was still a shadow compared to Vicious and my hopes for it

One thought on “Drunk Review: Vengeful by V.E. Schwab”