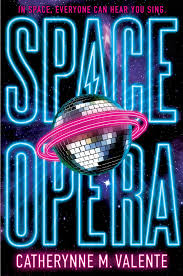 Literally just finished reading this and I’m a mess. OMG.

plot summary: ummm…a group of alien races has determined Earth is sentient enough to battle in the Megagalatic Grand Prix, effectively a music competition to determine whether a civilization can keep on keeping on or gets hit with a giant reset button. Two washed-up musicians (Decibel Jones and his remaining Absolute Zero, Oort) are chosen to represent Earth, so, you know, no pressure.

What I drank: I have eaten VERY little today + red wine and red wine.

I prov should wait to digest but I cant I’m an emotional wreck. It’s so good and so poetic and the end left me a mess. Also wildly upset because I tried to explain the plot to my husband and he was like “oh wasn’t that an ep of rick and Morty” and its like shut up no one even asked you.

The prose just so lyrical and reminded me of Terry Pratchett in the best way. We see far more of the competition’s backstory than the main characters, but I was ok with it, because both are well written. Also well written, the relationship between the male protagonists and the female protag, who we dont meet but is so wildly present for both men. The music references had me rolling, esp when earth is presented with the list of proposed contenders. I laughed so much, I wept at the end. This was a book I needed right now.

TWO DAYS LATER: kk I’m sober now and can coherently talk about this book. I stand by all of the above but I just wanted to mention how much I love Valente’s description-packed, run-on prose. My one disappointment is, for so much backstory and description, I was expecting…more? Which sounds contradictory because theres SO much to work with, but for all the description, it isnt as Eurovisiony as I wanted it to be, it was more exposition or character study. (Example, theres a LOT of time spent at the opening reception for the contestants compared to how little time is spent on the current year’s performances).

What I would pair it w: in a book full of wild imaginary consumables, best to ground yourself with the pint of lager Decibel Jones could never get his hands on.