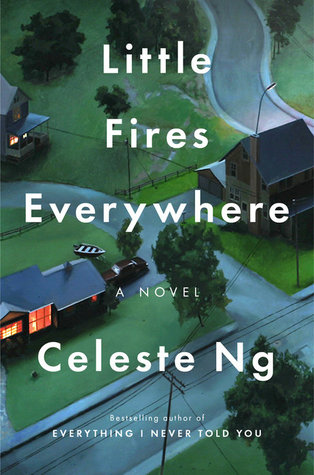 What I drank prior: It‘s Christmas Eve, so of course I had two extra strong White Russians and at least a bottle of red wine.

Spoiler-free Overview: This book pretty much follows a white suburban play-by-the-rules family and a more out-of-the-box mother and daughter duo who they’ve rented their extra property to. The two families intertwine in various ways across generations and eventually changes both in different ways. Side story: There’s a court battle that each individual family member takes a different side on, featuring a Chinese baby and what kind of family she should end up with.

Spoiler-free Thoughts: I very much enjoyed this book! It was a bit of a slow start, but admittedly that’s probably just my general impatience in all things and the sort of cliff hanger at the beginning that takes awhile to connect. Once the book got going though—man it was good.

Characters: This book was interesting because, at least for me, the characters I liked in the beginning did not end up being my faves by the end. Except Pearl, Pearl is great and understanding and pretty much the perfect kid.

Plot: The book sort of starts where it ends, which I ultimately found to be super rewarding though the entire time you’re wondering how they got there. Throughout there’s certainly your expectations or assumptions about certain characters that turn out not to be true or change. It’s definitely character-driven.

Writing Style: While probably nothing to write home about in terms of style, I enjoyed the writing throughout the book. Plus as I mentioned the start-where-it-ends format ended up working out. My favorite descriptions were related to Mia’s photographs and art process.

Honestly, I thought I was going to feel way differently about certain characters when they set them up at the beginning. Mia & Pearl seem like they’re just running away scared at the beginning, but it turns out it’s a totally legitimate reason for running away. I still think they could have stood up for themselves a bit more, but it certainly wasn’t out of character and I do wish them both the best.

The Richardsons seem pretty predictable, but they did end up surprising me. Mrs. R ended up being kind of the worst, but may have a redemption arc in the future. IZZY on the other hand, really wasn’t my fave at first, but turned into one of the best characters by the fact that she finally stood up for what she believed in and pursued her own future in an effective and driven way.

As for the side story about Mirabelle/May Ling, I have mixed feelings on how it turned out, but it was still a great and thought provoking story. You could definitely see both sides of the battle imo.

Rating: 4.8/5 shots. I reeeally enjoyed this book and the characters kept me interested.

Drink pairing: An unusual red wine. It’s a solid good read with enough of a unique take (and characters) to keep you interested.

Cheers until next time,