Hero of the Empire: The Boer War, a Daring Escape, and the Making of Winston Churchill 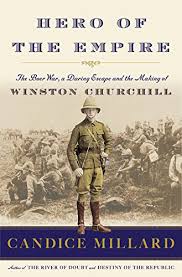 Champagne Bitches!!!!!!!!!!!
I’m going to avoid my normal headings because honestly this is furcking history.  There aren’t really any spoielrs.  I think the first thing I took away from this book is that Winston Churchill is kind of a dick.  Don’t get me wrong.  I still respect the hell out of thim , and I want to read abook about a later period in his life, but this book does not necessarily paint him in the best light.  Honestly he seems really manipulative, self-involved… I ran out of words but I think you get the point.
He loses an election and decisdes that the best way to improve his standing in society is to go fight in a war that the British picked becuase the Boers had managed to successfully fight them off a number of years prior.  Except that all the Brits are super excited so he can’t get in as a soldier so he goes as a war correspondent.  Except that it’s Winston Churchill so he can’t help but to fight and gets captured and there’s something going on with his dad and the Boers so everyone knows who he is.
He spends his entire time being captured whining and lazing around saying that he should be freed but the Boers hate his guts so no way is that gonna happen.  he plans to escape with two friends but takes and opportunity to leave that the others can’t take advange of and kind of screws his friends over and then only manages to survive by stumbling on the right people at the right time.
This book doesn’t really show off any of the brilliance of Winston Churchill in later life.  there are moments where you can see some of the strategic genius coming through but for the most part it seems like he only succeded due to luck of meeting the right people in so many different situations.
I had a really hard time reading this book.  Part of it is that I’m in a place that makes it a little hard to pay attention to books (I’ve only finihsed four books this month?) and this book didnt really help.  It hink it took about 2 motnhs to read.
If you have any particualr interest in Winston Chruchill or the Boer War this is a probably a good book.  But if you just like history, I would probably suggest that you read and Erik Larson book or Hidden Figures which I read in 2016 and was a masterpiece.
This book is a really old scotch.  I personally don’t have a taste for it, butfor other people might be their cup of tea (British reference?).   Basically it could be a classic for a certain kind of person but I am very much not that person.