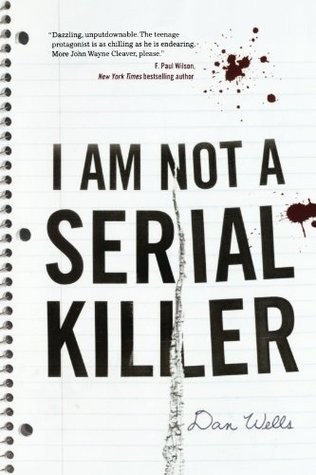 I Am Not A Serial Killer by Dan Wells

Synopsis: john Wayne cleaver is a kid who is obsessed with serial killers, and he thinks he might become one if hes not careful. But a serial killer hits his town and john might need to stop being careful if it means protecting his loved ones.

What I drank: did you know there’s a brewery WALKING DISTANCE from my house? So I had beer and beer. I frickin love sours.

I’m totally gonna sound like a dick, but like the entire time I was reading this, I kept thinking “I’ve read this, it was called I Hunt Killers by Barry Lyga, and I liked that book better.” To be clear they are NOT identical, but theyee both abt teen boys terrified of becoming serial killers, so it’s super hard not to compare.

Like the voice of the protagonist. John’s voice just felt too grown up and self aware? I dont care how mature you are what teen is so self aware they think thwy might be a sociopath? Whereas the protag’s voice in I hunt killers felt way more age appropriate, and the backstory was more understandable to the character development.

I dont have a lot else tbh, I was just underwhelmed, except a spoiler complaint

I think I could have bought into this more if the supernatural element were blown up more. It felt like john just bought into it with minimal hesitation, as did his mom, and it’s like HOW ARE YOU JUST ACCEPTING THERE IS A DEMON COME ON.

What I’d pair it with: shots of fireball to power through

One thought on “DRUNK REVIEW: I Am Not A Serial Killer by Dan Wells”