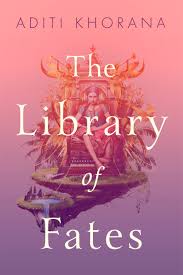 The Library of Fates by Aditi Khorana

What I drank prior: Football Sundayyy, I’ve had lots o beers.

So, this is a re-telling of an Indian fairytale. Basically, girl is supposed to be married to the bad-guy emperor. Bad guy does bad stuff and Amrita runs away to go find… something. She’s paired with an oracle named Thala, they go on a journey together.

So… I don’t… really know what to say about this book. It was… fine. I thought it was interesting because I don’t know much about Indian folklore but… that’s as far as my interest went.

Characters: They kinda fell flat for me. It’s supposed to be fun, feminist, with romance? I guess? But I didn’t get attached to any of the characters…

Plot: I really don’t remember what happened between bad-guy doing bad-thing and the end. Which made no sense btw. There was a storm? I think? And then suddenly they were instantly somewhere that should have taken two weeks? I think?

Writing Style: I will put the writing style in the “pro” column. It was flowery and pretty. Doesn’t make up for the other lacking elements.

What to pair it with: Smirnoff Ice? It’s ok, but it doesn’t do the job very well.

COMMENT DOWN BELOW: Can anyone recommend other Indian Folklore retellings? I am really interested in any good ones that are out…