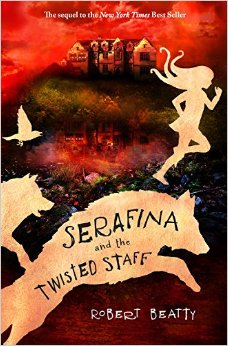 Serafina and the Twisted Staff by Robert Beatty

What I drank prior: A bottle of wine and at least 7 beers… what am I to do?

Spoiler-free Overview:
Look…. This is middle grade. So there’s that. But anyway. So after what happened in the last book, we have Serafina, the awsome girl, and the nephew of the awesome dude trying to find out what’s going on in this world. So there’s shit going down…. animals are goin nuts, some weird guy is showing up and hungting down Serafina. In disguise and stuff, just like the last book. She’s gotta figure out who it is and why…. ALL OF A SUDDEN there’s a new wild character like her, a boy… dun dun dunnnnnn. She’s left to determine where she belongs.

Spoiler-free Thoughts:
I adored this. Mr. Beatty has done it again. What a brilliant middle gade.

Characters:
They are still wonderful. Sera’s conflict, Braeden’s conflict, THE UNCLE. Man, he’s such a great character. He takes care of his own and I love it. I had to remind myself not to be super suspicious of characters because its middle grade… because how oftern do we find good parental figures in fantasy huh? Rarely if ever. Also liked te newly introduced characters.

What to pair it with: Red wine. Something with a good body, because  man, this book was excellent and well rounded and beautiful.