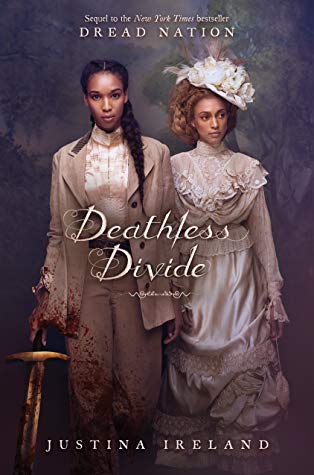 It’s Linz, and I read Deathless Divide, the sequel to Dread Nation (zombies ended the Civil War, but not — shocker — 1800s views on race and gender).

Thanks to Balzer + Bray, ALA, and Ireland for the advanced copy and chance to read. Deathless Divide came out February 4, and you can buy it on Amazon or at your local independent bookstore.

What I drank: My mortgage partner offered to drive myself and some friends around for wine tastings, so obviously, I drank, like, 30% of the wine in Loudon County.

Synopsis, from Goodreads (excerpted): After the fall of Summerland, Jane McKeene hoped her life would get simpler: Get out of town, stay alive, and head west to California to find her mother.

But nothing is easy when you’re a girl trained in putting down the restless dead, and a devastating loss on the road to a protected village called Nicodermus has Jane questioning everything she thought she knew about surviving in 1880’s America. …

Katherine Deveraux never expected to be allied with Jane McKeene. But after the hell she has endured, she knows friends are hard to come by – and that Jane needs her, too, whether Jane wants to admit it or not.

Watching Jane’s back, however, is more than she bargained for, and when they both reach a breaking point, it’s up to Katherine to keep hope alive – even as she begins to fear that there is no happily-ever-after for girls like her

My drunk thoughts: HOTTDAMN good job justina ireland. its been twoish years since Dread Nation came out adn i had that debate of ‘do i reread book 1 or do i just dive in oh god am i setting myself up fo failrue?’ALSO SICK COVER ART

Book 2 starts where book one left off – Summerland isdone and Jane and katherine are on the run with their merrt band of surbvivors, on their way toa sanctuary that – ahcoker – isnt what it seems. as our MCs cros s paths with some new and old cahraceters, jane and katherines paths takea real dickenisan during a major event. jane’s story gets real dark, and it may be more than katherine can ahndle.

not everoyne does althistory or reimaginings well, and zombies re going th way of vampires (thanks twilgith), but Deathless divide is a goddamn gem in a field of garbage.

Thisis definitely a different book from book1, (i mean hi jane and katherine DEVELOPED and CHANGED bc PEOPLE), but it’s an excellent companion and i am overjoyd i ws able to read it

What I’d pair it with: Even though they never go to Kentucky, a stiff smoky bourbon would be perf.