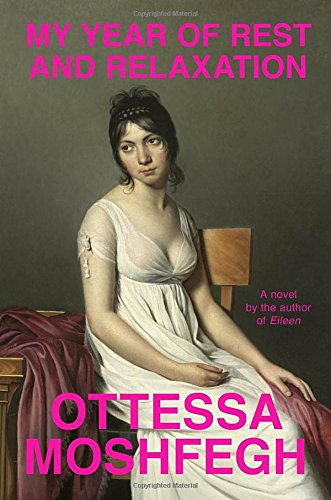 My Year of Rest and Relaxation by Ottessa Moshfegh

This is a sober review because I’ve been sick for like a week – thanks, germ-factory nieces and nephews. But I’m up coughing so much that I’m fairly sleep-deprived, which is kind of like being drunk. And actually, my sleep deprivation pairs well with this book. So I guess I “drank” a ton of Mucinex and Afrin?

From Goodreads: “A shocking, hilarious and strangely tender novel about a young woman’s experiment in narcotic hibernation, aided and abetted by one of the worst psychiatrists in the annals of literature. Our narrator has many of the advantages of life, on the surface. Young, thin, pretty, a recent Columbia graduate, she lives in an apartment on the Upper East Side of Manhattan paid for, like everything else, by her inheritance. But there is a vacuum at the heart of things, and it isn’t just the loss of her parents in college, or the way her Wall Street boyfriend treats her, or her sadomasochistic relationship with her alleged best friend. It’s the year 2000 in a city aglitter with wealth and possibility; what could be so terribly wrong?”

My thoughts: tf did I just read, because that description was not the book I read.

So, first of all, this is not a badly written book by any means. The narrator is unreliable and sleep-confused, but her voice worked, and kept me interested (which is a little weird bc not a lot happens over the course of the book). I’ve had Moshfegh’s debut novel on my TBR and I fully plan on reading that this year now.

But I found so much else that was problematic. The narrator is in fact a privileged white girl, which is fine, she constantly acknowledges her privilege. But her shitty shrink, terrible “boyfriend,” and unhealthy friendship from the synopsis (and this isn’t Goodread’s fault, a lot of sites used a similar synopsis)? This isn’t a bad things happen to pretty people story. The narrator is an active, aware participant on the path she takes–so even though the writing is solid, I can’t connect with the narrator at all because she wants to play passive when she contributes to almost all her problems.

Also, the fact that it’s 2000 going into 2001 is repeatedly brought up, but I still haven’t figured out what the payout was from doing that.

And finally, the ending was dumb. That’s all I can say. Dumb.

There’s honestly not a lot more that happens in the book without spoiling, and even if I did spoil, not much happens then.

What I’d pair it with: I mean I guess a pill cocktail since the narrator takes a tooooon of meds, but probably a straight vodka.